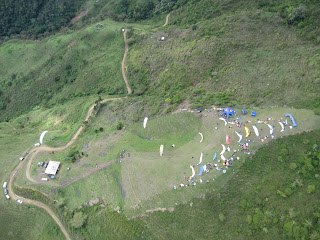 We've had a couple of dry days so the valley is starting to dry out and cloudbase is going up accordingly (yesterday I got to 2300m, and today it was projected to get to 3000m to the north of us).

Today's task (103km) had a hiccup at the beginning...a pre-start turnpoint at the antennas that we had to tag, before flying south to the start which was about 25km away.  Now, I launched about 10 minutes after the launch opened and was one of the first gliders in the air, and yet, after tagging the antennas turnpoint and then boogying it south to the start, I only got there with 4 minutes to spare.  So, many of those who launched later were probably f*cked for getting to the start in time.  I think the rationale behind the pre-start turnpoint was to spread people out a bit, but I think people were spread out a bit too much.  Given that the start radius was 8km, I'm pretty sure a direct dash to the start area instead would have still resulted in enough of a spread to reduce congestion.

Anyways, Amir and I were at the start in time, got high, and were at cloudbase when we left for the valley crossing to the next turnpoint.  Jim was a few minutes behind us and followed.  In retrospect, our gaggle of about 20 pilots or so started the valley crossing at the wrong time.  There was a band of high stratus coming through which was starting to shut things down on the other side, and we were caught in the middle of the valley when it came overhead.  I was stuck searching for lift, any lift, about 100m above the ground when I hit 0.1-0.2m/s.  It was fickle and not well-formed, and the shade was getting thicker.  I could see that the sun would return in about 20 minutes if I could just hang on and survive.  But nope, it was not to be and the slight lift turned into 0's and then sink, and I ended up sinking out in the middle of some sugarcane fields about 2km from the turnpoint.

PS when landing in sugarcane fields, make sure to land on the tractor-access roads instead, even if the sugarcane looks low enough to land in.  I landed on an access road which is a good thing, because upon closer inspection, sugarcane plants are sharp-looking and, by the way, are sitting in standing water, and would be a bitch to extricate a glider from.  And if you land in the tall stuff (10-12' high) then you are truly in trouble since you'd probably get hung up above the ground and rip up your glider pretty good while getting it out (assuming you could even reach it).  Add the fact you're potentially far from people and it's 30C+ out, you would not have a fun afternoon!

Jim was in the same predicament and ended up landing too, but closer to the train station that marked the turnpoint so he wouldn't have to walk with his gimpy knee.  I, on the other hand, had a 45 minute walk before I came across some kids who gave me a ride to the train station on their dirtbikes, where I met up with all the other unfortunate souls who had been shaded out.

Meanwhile those who managed to hang in there (including Amir) either boogied to the turnpoint, tagged it, then ran for the salvation of the sun, or were able to hang out for the 20 minutes or so before it got sunny overhead.  Of course the next few gaggles that came through also had sun on their side and continued on.

However, it wasn't an easy flight from the turnpoint to goal...it was about 50km of upwind flying (there was a noticeable north wind), and many pilots ended up landing along various points along the 50km.  Apparently pilots going to goal chose one of two routes: either the direct line to goal over the flats, or back to the mountains (which were in the lee of the westerly seabreeze by this point) and using it as shelter from the valley wind.  Preliminary reports are of 10-12 pilots in goal, so most of the field who made it past the turnpoint must have been culled by the upwind flying.

Pawel had a good flight; his best of the comp so far, and landed just past the turnpoint.  And he's flying with 2 gimpy arms :)  Amir flew to within 14km of goal, landing because he essentially ran out of usable (thermic) daylight.