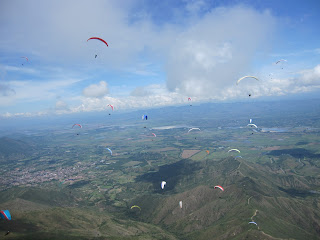 We weren't very optimistic today because it was socked in at launch and there was a low layer of clouds below us covering the valley.  The task committee called a task but delayed things since cloudbase kept lowering to below launch and we couldn't see anything!  But eventually it cleared up enough and off we went.

Today it was another back-n-forth along the ridge, followed by a valley crossing and then goal in Zarzal.  Once in the air the day felt different...it was sunny on the range and thermals were plentiful and strong, so it was easy to stay up.  It was only on the way back along the range back to the antennas that it started to shade out and Jim and I had to slow down.  One pilot got into trouble and tossed his reserve, coming down on a spine in between launch and Roldanillo.

Back at the antennas and it was getting weaker, and Jim was about 20' higher than me when he hit the thermal that got him out of there.  I didn't take the thermal (which I should have but I didn't want to drift back behind the ridge into the lee that low) which meant while Jim got to cloudbase and continued onwards, I was stuck ridge soaring the antennas for about 30 minutes waiting for another strong-enough thermal to come through.  Gah!

Eventually I was able to get myself out of there and high enough to start the valley crossing, but I was mostly by myself at this point.  Slowly made my way to the other side where I figured the low hills would make things easier, but not really.  I wasn't really able to get high enough to feel comfortable with long glides, and I eventually landed 8km short of goal.  I could see the goal field with pilots landing there but I just couldn't reach it; I just needed 1 more thermal!  Gah again!

Anyways, my main mistake was not committing to the climb with Jim back at the antennas, so by the time I got out of there I was by myself which is never good for looking for weak climbs in the valley.  I had originally thought 50-60 pilots had made goal, but apparently most of the lead gaggle landed short of goal, and in the end there were only 30-ish in goal (from gaggles #2 and #3).  Jim and Amir made goal so they'll get good points for this task.