More light north wind in Pemberton, not the greatest flying, but good practice for comp flying: dealing with less-than-optimal flying conditions!  It was certainly XC-able, just a bit funky and not a classic Pemberton day.  But went out to Spindrift and back and the snowline has receded a lot!  The Hurley Pass road is melted-out a lot higher now and upper launch is now accessible via John Lyon's shuttle service.

Better than yesterday, probably due to the fact we actually had blue skies instead of white skies, but still not a "gimmee" day.  Got to almost 1500m a few times but it was more like 1200m the rest of the time.

Near the end of the day a pilot flew into some trees just west of launch at around 400m.  He was totally fine but trapped at the top of the tree, with his glider visible and dangling from the crown.  We advised him to secure himself to the tree and await Search and Rescue since he wasn't sure he could descend the tree himself.  Fortunately he had gone in quite close to the remains of an old road so SnR was able to drive partway and then hike the remaining bit.  Last we heard they were just getting him out of the tree as dark was coming on, so I imagine the pilot will have to return tomorrow to get the glider out.
No comments: 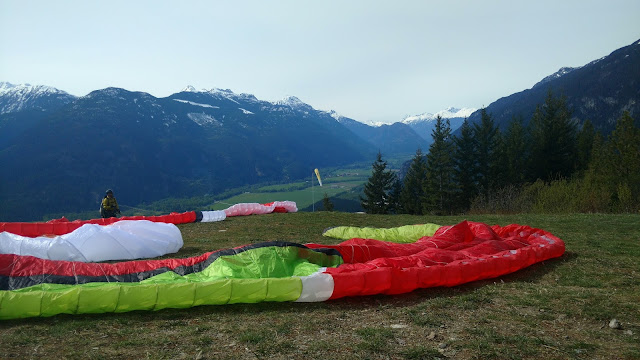 A rather lame day after all, for XC flying anyways, as none of us were able to get above 1000m with the thick high cirrus.  I spent over an hour groveling at lower launch height, or below, and when I finally got back up to launch height, I took the opportunity to top-land so I could dress down and rest.  Andrew "got away" but landed out at the base of Owl, and most everyone else landed in the LZ. 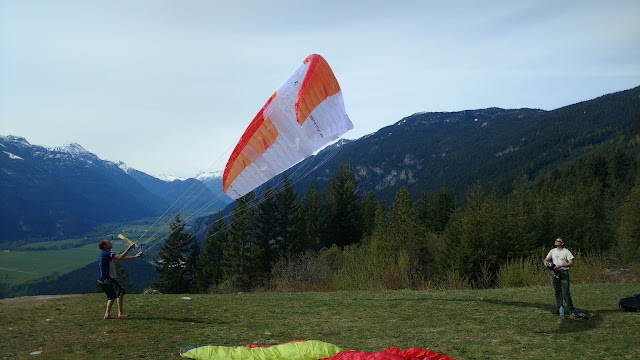 At the end of the day I flew the Skin down, my first single-surface glider, and it was fun!  A zippy little glider and idiotically easy to kite and launch, but a bit disconcerting in flight with all the rustling of the exposed ribs.  And the glide and climb is much less than my current glider.  A fun toy if you want to hike up with a glider in a 15L daypack!

Lots of pilots were out for their first 100+ km XC's of the season, flying up to Spindrift Mountain and back to Pemberton.  There is still a bit too much snow on the valley floor to go much further than Spindrift, so we have to wait a bit for Athelstan and beyond.  The wind was north but flukey so the thermals were a bit hard to read and I saw lots of wing dancing, and some pilots complained of nausea as well.  But it was light-enough winds to not really be a problem and climbs to 2600m.  It was cold!

Some pilots flew south instead, down Lilloet Lake, and reported equally light-but-north conditions as well.  All in all it was a good day to stretch the XC muscles.

Sunday it was the regular SW direction but still lots of lift, but it took a long time to climb out, 45 minutes for Andrew, Simon, and myself.  Painful, but worth it to finally get high and start moving.  It wasn't really possible to head over the back since we weren't getting high enough so we flew north again, this time turning around at Sampson.

The SW was picking up and I could see lenticulars forming in the distance so I suspected it would get windy soon.  After my photo session I flew back to launch and the SW was indeed picking up, to the point that I wondered if it would become unsafe to land at the usual LZ's later on.  I ended up landing near the gravel pit to retrieve the car, and during my leisurely packup watched the wind pick up and the trees start waving around.

Sunday flight.
Those that flew down Lilloet Lake had to fly back into the wind and it soon starting raining paragliders over Mt. Currie (the village, not the mountain!).  And for those that went to the Wray LZ it got gustier with some pilots having to speedbar their way down.  But in the end everyone was down safely!