My first hike-n-fly to Miller Ridge for this season!  The forecast was for possible overdeveloping conditions so an early flight seemed like a good idea, so we took the 8am shuttle to the drop off spot and then it's a ~1 hour hike (400m elevation gain) to the actual launch meadows.

The mosquitoes were epic, and I resorted to putting my bug net on to at least keep my head and face free of mossies.  Wear long sleeves and pants if you are going up Miller!  It gets better once you break out into the alpine, but even on launch there were still some, so be prepared.

It was blowing lightly from the east and occasionally shading out from the big clouds spewing over from the MacKenzie side, so I waited for a sunny cycle and was able to climb pretty much right away over the old hut.  Others climbed up over the end of Miller Ridge, and Vlad and Igor said they were flying south to Whistler.

Peter went into the Soo valley and reported low cloud base and some wind so I decided not to go there and stayed around the Ipsoot area, exploring the ice fields and crevasses.  Then it was over to the flanks of Sugarloaf and then the shade was full-on, and it was the giant glide to the Pemberton LZ while Alex landed at the Miller Beer Farm to get his first entry in the "Paragliding PubTag" game.

Igor and Vlad made it to Squamish and return, hats off to them for pushing despite the low cloud base and not great-looking conditions!

Today was a hard day to predict, since the actual flying conditions didn't match up with the forecast and the opening-up skies was very delayed.  We were initially thinking of heading to Mt. St. Benedict (and a group did go there) but we eventually decided on Woodside instead with the overcast skies and the fact WS usually opens up first.

But it turned into a much different day.  A slow start at Woodside and also Mt. St. Benedict, and cu's in nonstandard spots, and unexpected rain cells.  Alex was able to cross the valley to Bridal by going straight over Rosedale, and I was able to fly west via Harrison Knob since Sasquatch mountain was in the shade.  The MSB pilots were just launching when I was crossing to Harrison Knob and we ended up meeting up near Big Nick, where Peter ventured into the Norrish Creek area and I poked my head in ;)

Then it started to rain on us, so Peter and I went on a giant glide to Kilby in the shade to land at Eagle Ranch.  Of course the sun came back out about 30 minutes later!

Meanwhile over at Bridal Alex got rained on a bit as well and decided to land in Agassiz.  The MSB pilots were also raining out of the skies over Woodside so there was a bit of carpooling to get everyone back to where their cars were.

Overdeveloping in the Fraser Valley but still fun on the coast, east winds up high meant the OD was slowly making its way towards us but lots of time to enjoy the scenery.  6 pilots out at the same time so we actually had others to fly with!
Brett went over to Cypress Mountain and back while Alex went back to Dam Mountain, but the east wind made me not want to venture too far back and get caught back at Crown. 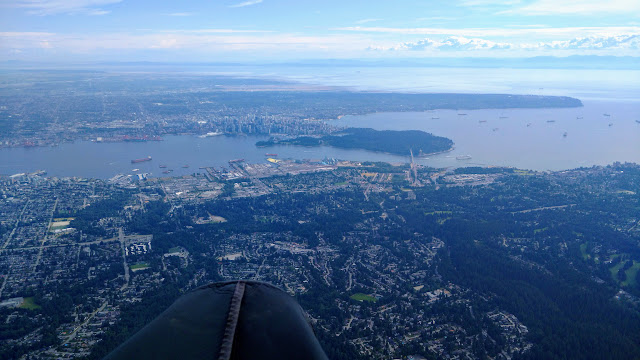 Both were average days at Pemberton, I turned around at Copper Mountain both times since it was overdeveloping a bit and didn't want to get caught on the wrong side of a big cloud.  I think other pilots may have gone a bit further, North Creek etc, but most pilots were being pretty conservative.  One pilot got sucked to 3800m when cloud base was around 2900m and after some SIV maneouvers, eventually popped out with a very wet glider and a greater appreciation for cloud suck!

It's been a while since going coastal ridge flying and it looked like a stretch of good coastal winds coming up in the forecast, and it coincided with some time off, so Alex and I decided to head down to Oregon to check out the flying sites there.  Site Guide to Oregon Coast.

Oregon has oodles of coastal flying sites, but many of them work best just before, or during, cold fronts passing through.  When that happens the usually too-cross wind straightens up into some form of westerly, and all of a sudden a lot of ocean sites are available!

We started off near Cape Lookout which is a big point sticking out into the Pacific, which means it will work even when there is a bit of north wind.  But not too much north wind, if that happens then it will be very difficult to get to the LZ in the sink, and given that there is no other LZ except the upwind beach, you will either go into the water (with tragic consequences) or you have to go over the back and attempt to land in the rotor/lee and whatever rocks/beach/whatever you can find.  It's a very dangerous site in summer when the north winds become more pronounced, and we were there just as the "dangerous" period was ramping up.  In fact we opted against flying there when we arrived since it was very north and the local pilots recommended against it, and to go to Kiwanda instead.

Cape Kiwanda is a sand dune which also sticks out into the ocean, giving a (small) playground in either south or north winds.  When it's busy there isn't a lot of room to play, but if you find yourself there on a quiet day, you have lots of room to kite up, do waga, practice your spin landings, and pretty much anything in between.  The south side is closed in summer due to dory launching, and the prevailing wind that time of year is north anyways, so go to the north side!

But if you are wanting more space you will want a bigger ridge or sand dunes.  We also explored Sand Lake (just south of Cape Lookout) and those dunes are certainly flyable in a westerly wind.  And since you probably have to walk out (it's also a motorized quad spot) you will almost certainly have the dunes to yourself.

En-route back to Cape Lookout and the campground (nice camping right at the LZ, tent and RV spots are available plus "warm" water showers we stopped at Cape Lookout and it was actually blowing more onshore and less north, so Alex opted to have a sunset flight while I took photos.  Cloudbase was pretty low and he reported having to make sure not to get cloud sucked around 1200' and it was quite strong in the air, but very smooth.

Oceanside is another flying site north of Cape Lookout.  It takes a SW wind and the day we were there it was too light winds so no flying but lots of beach walking and enjoying the super-low tides (it was actually minus numbers on the tide tables!).  Lots of other people were out enjoying the unusual access to the clams and mussels usually too far offshore to reach by walking out, and it was very atmospheric with the low cloud base and moody skies.

Our last stop was at Fort Stevens near Astoria, right at the very extreme northern end of Oregon, where there are awesome sand dunes for 10-15 km and multiple access points.  Brad and Maren of Discover Paragliding run a school there, and they were very busy with both paraglider and Paramotor training.  You can access the sand dunes via Parking Lot B, or go to the Airedale shipwreck beach if you'd rather start from there.  Kite up in the venturi and you're good to go!  The dunes are very friendly with a gentle slope back, so getting dragged over the edge is not a big deal, and it's all sand and grass so no sharp or pokey bushes to brush against.  That site is a real treat, and works best in WSW winds of 15-20 kph.