The forecast for pretty much everywhere else looked bad with low clouds, rain, and wind, but Blanchard was looking the best of the lot.  Lots of Canucks there today taking advantage of the light winds and thermic conditions.

Cloudbase was quite low, less than 1000m initially, but it (slowly) rose throughout the day to 1200m at the very end of the day.  Big development over the back but the coast stayed nice, so near the end of the flight Peter, Martin, Dave, and I flew south to connect with the cloudstreet which was stretching to just south of the Skajit Regional Airport.  The first glide away from the mountain was the toughest, as it was a long way and we couldn't get very high (1100m), but once we connected to the first cloud it was 3/4 bar all the way south to the airport, staying in the smooth cloudsuck the entire time.
We turned around at the airport since there was lots of air traffic near the runway; later on we saw 8-10 stunt planes doing barrel rolls and other synchro acro, presumably practicing for the US's Memorial Day celebrations tomorrow.

Other pilots ventured inland to the Sedro-Wooley and north towards Acme, while most others stayed in the vicinity of Blanchard.  Probably 20-25 PG pilots out today!

After yesterday's cu-nims and thunderstorms in the Fraser Valley as we drove back from Cranbrook, today was looking quite nice.  So back out we went to try the 100 km Al Thielmann triangle.

Cloudbase was way up there, above the legal airspace limit of 1981m on the Woodside side, but it wasn't the nicest air.  The west wind came in a bit stronger than we expected which got me as I was trying to punch west to tag the Dewdney TP.  Pattison wasn't working either, and after getting flushed at both Pattison and Dewdney, and hearing the reports about how nasty the corner of Dewdney was, I decided to get out while I still could, and flew back to Woodside.

Over the back to Agassiz Mountain and then Bear, but I couldn't get high enough at Bear to make the jump to Ludwig with any comfort.  Norm had tried the Green Hill route and no luck, but was able to find a flatland thermal over the freshly-plowed fields downwind, and made it across.  However I was unable to find a similar climb, and ended up landing at Seabird Island.

Alex managed to make it across to Ludwig and did the Ludwig-Elk run, while Igor flew north up Harrison Lake a bit before landing in Laidlaw.  Al Thielmann did some bear-country-flying through the Norrish Creek valley before popping out behind Bear and then doing the Ludwig-Elk run as well.  And lots of pilots made the jump to Sasquatch and beyond before the west wind shut them down.

An easy hitchhike over to Bridal, just in time to watch the Bridal pilots coming in to land in the late afternoon wind.  The schmoo was coming in too, but earlier in the day the Bridal pilots had gotten above Cheam and 2400+ m, since the airspace limit is much higher on the Bridal side.  Too bad we were forced to stay below 1981m on the Woodside side; the air may have been much nicer, higher up!

Alex and I are in Cranbrook for Brett Yeates' wedding and we took the opportunity to fly one of the local sites, Wasa.

Parm and Will from Smithers joined us for a 4x4 adventure and we discovered the road is clear of snow all the way to launch at 1800m!  Unfortunately it was still quite windy (it had been blown-out all day) even at 7pm but it looked to be dying a bit as the shmoo came in. 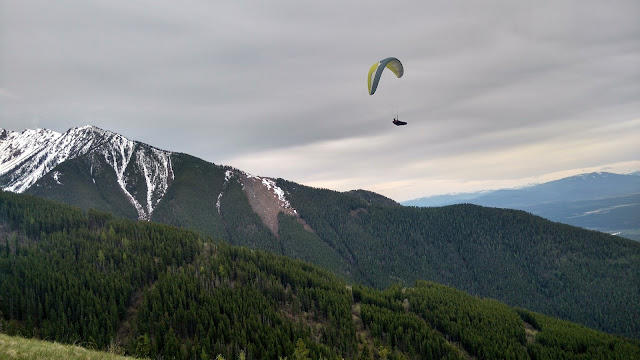 A nice soaring flight in the SW winds until it got close to dark and then landed at the large LZ's on the way to Lazy Lake.  That was the last (and only) flying of the trip as it was a windy period pretty much all over the entire province.