Today wasn't as good as yesterday...it was essentially zero wind up high, and LnV elsewhere. The fire at Lake Errock was saying light inflow by the end of the day, but that didn't help matters. We stayed on launch until around 2pm, when people started launching. Most sunk out to the last couple of cutblocks and were able to stay there indefinitely, eventually sinking out as sink cycles came through or too many people crowded the lift down there.

Most people were launching and heading south; Derek said we should try heading north. So after he launched I followed suit and went north, where I found a semi-reliable patch of lift between launch and the north cliffs. Derek meanwhile had flown out; someone mentioned he had a tangle or knot.

I was able to stay in the patch of lift and get above launch (Martina beat me to that goal though; she had launched before me and gotten above launch for 1-2 minutes earlier). Highest was 840m. But I spent most of the 1.5 hour flight at launch height or below, scratching in the light lift and glad I had the skies to myself and nobody to have to share with :)

Gary Hatchey showed up with a tandem and got off launch around 3pm; he didn't encounter much lift either and headed for Eagle Ranch. As I eventually sunk out into Riverside another carload of pilots showed up for sledrides and followed me into Riverside, or Joe's.

Definitely a harder day than yesterday, but still satisfying to get some practice in light lift conditions. Looks like no flying (thermal-wise anyways) for the next few days, so back in the bag the 'bag goes.
No comments: 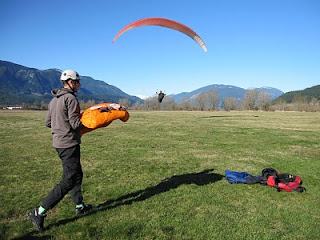 With the sunny forecast we had been hopeful for flying before this weekend, but alas, outflow winds kept us grounded all week. We thought it might be flyable on Saturday (small chance), and figured worst case scenario, we'd do some site maintenance instead, camp out, and be there for the predicted good flying on Sunday.

When we got to Woodside it was too much outflow so we got to watch Thomm, Rob, Al, and Tom C. fly from Horsefly, where they were able to drive to within a 2 minute walk of launch. Extended sledrides for all (Martin N. drove for them) and they landed in various spots on the peninsula. Meanwhile we were kiting at Eagle Ranch, so when everyone was gathered up we headed for Bridal to take a look at the LZ situation and see what we needed to do after the winter. 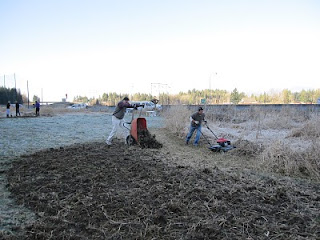 The ditch in the Bridal LZ needed to be re-dug (as it will fill in with silt otherwise and plug up; last winter a beaver dam plugged up the ditch and caused the entire LZ to be underwater). Given what a large job this was (Rob had already done a huge amount of work already), we opted to reconvene Sunday morning to do the actual work, and fly Woody afterwards.

Next morning saw 7 people in the Bridal LZ doing site maintenance. Rob, Alan, Alex, Martin N., Martin H, and myself were working on the ditch, and Derek was with his mower. We moved the dirt that Rob had previously cleaned out of the ditch to the north side (which is usually damp due to it being lower than the rest of the LZ). This will raise that area by a few inches to make it more level with the rest of the LZ, and be less damp for packing up etc. 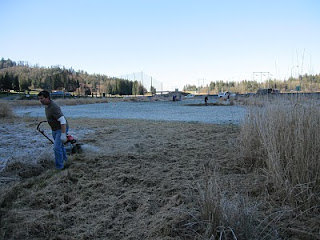 Meanwhile Derek was working magic with his mower, extending the north end by another few feet, and mowing an extension to the east side of the LZ (the end that people, if they are going to land short, will end up in). Derek created a slot about 30-40' deep which will make it easier for those who land short and would otherwise land in reeds.

Back at the ditch, we had moved all the dirt that was previously "berming up" at the edges of the ditch; now the ground slopes gently towards the ditch rather than being an abrupt cliff into the ditch. Right now it's pretty dirty in those spots, but in a couple of weeks it will green up with new grass and look much better. 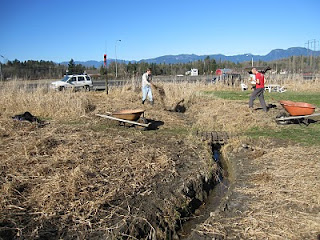 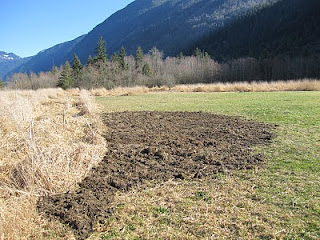 After 2.5 hours of work we all headed for Woodside as the winds were still light. Up on launch it was busy, but not as busy as I expected (where was everyone?). Martin H. launched first and stayed up just fine, so the rest of us got our stuff together and soon joined him.

I hadn't flown since Halloween of 2009, and felt a bit rusty for the first few minutes, but soon got the rhythm of things and was shortly above launch. It was fairly easy to stay up, and we approached 1000m a few times. There were a lot of bald eagles out, sitting in the trees and watching us, and would deign to join us for a few turns before scornfully flying off to find better company (mating season is coming up, after all!). 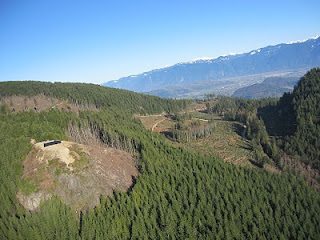 There is a new cutblock on Woodside (see photo), between launch and the south knob. The logging company is finished logging (for now) and will be trucking out their timber for the next while. Keep an eye out for logging trucks coming down full-speed if you head up Woodside on a weekday. I think they have their frequency listed at the bottom of the road; a good idea to monitor it as you drive up, and announce yourself so they know to watch out for you.

Out on the river the gravel trucks were working full-tilt on the large sandbar south of Redneck Island; they have now constructed a bridge to connect the sandbars (see last photo). Too bad it doesn't connect to the Woodside side; otherwise we'd have a new option when attempting the Elk-Woodside crossing direct.

There was one "flush" cycle near the end that almost claimed the lot of us, but most managed to survive until it turned on again. Alex top-landed to warm up, and Rob top-landed at the end of the day to drive Wally's truck down. I l 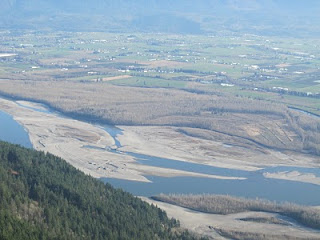 anded at Eagle Ranch after flying over to Redneck Island to play with the thermals that were coming off at the end of the day, and wave to the fishermen and ATVers. Total airtime 2 hours 27 minutes; max altitude 984m ASL. Good to be back in the air and get the cobwebs out!
No comments:
Newer Posts Older Posts Home
Subscribe to: Posts (Atom)