Thunderstorms predicted for the afternoon but the morning was supposed to be good, and it was indeed clear skies when we woke up.  But we could see the skies were gonna fill in soon, so up the mountain to the SE launch for an early flight with the local tandem guys.  Light thermalling but very shady, and eventually everyone landed after 30 minutes or so.

But then the sun made a (re-) appearance and all of a sudden it looked really good.  Back up to launch and this time it was easier to stay up and get to cloudbase around 2000m and do a mini XC past la Mure.  But we could see the big clouds starting to build and the shade was coming in fast again, and this time it looked fairly permanent.  I could see a glider trying to get down with big ears and not being very successful, so I found a nice patch of sink and was able to get down and packed up long before the first claps of thunder made an appearance.  A bunch of HG's set up on the west launch (the SE launch is kinda shallow for them) had to break down and drive back down after it OD'd and the day was clearly over.

Tomorrow may be another St. Andre day, or perhaps to Gourdon to meet up with Jim and Colleen, as the wet weather is predicted to pass tonight for drier skies over the next few days.
No comments:

The weather was looking a bit better to the south so it was time to head to Greolieres and Gourdon.  After exploring Greolieres on a windy day (nobody was flying) we headed to Gourdon as the winds were much lighter and the skies were the bluest we've seen in a few days.

Initially there weren't any other pilots on launch (usually a bad sign for most sites in Europe), but it turns out we were just early...carloads of pilots showed up within the hour and soon everyone was figuring out when to launch and whether we could stay up etc.  Bands of high cirrus every so often but essentially blue skies and light SE winds, but an inversion kept us below 1300m.

I flew over to the Ozone testing site and watched the Ozone guys put their prototype EN-B and -C gliders through their paces, while Bruce Goldsmith was flying nearby on his new EN-C as well.  This part of the flying site has quite high ground below which means it's easy to sink out if you aren't careful...it's quite neat to have these differing levels of terrain under you as it keeps you on your toes!  Meanwhile the British tour group was lobbing pilots off and they were staying up over the actual town of Gourdon (perched on a cliff) so I flew over to join them.  It was very cool to fly over this little town with sheer cliffs dropping down to the valley to the Mediterranean sea.  I could see the runways of both Cannes and Nice airports, as well as some cruise ships.

All this while we could see a few cu's to the east, towards Nice, but all of a sudden something changed and cu's started forming at 1300m right over us.  I was keeping an eye out for any weird wind that may have appeared with the cu's, but nope it stayed light winds so I kept flying and back to launch to watch the later pilots continuing to lob off launch.

Pilots kept launching and flying until around 3pm, when the approaching front clouded us over and it was time to land.  It looks like that's the end of flying for at least the next day or so, as this next system winds it way through the region.
1 comment:

Alex and I escaped the torrential rain and thunderstorms at St. Hillaire by driving south to St. Vincent des Forts.  It was still way too windy to fly, but at least we were in the warmth and sun, which is almost as good!  Did some exploring of the village and some hiking around the lake before heading south to St. Andre.  Met up with a bunch of pilots (including some Russians who drove all the way from St. Petersburg!) and we may fly tomorrow morning :)
No comments:

Alex and I are now in St. Hilaire for the annual Coupe Icare festival.  A sunny start to the day and the cu's were already popping at 9am so it was time to fly!  Launched from the south launch although the north (costume) launch was also working.  Cloudbase wasn't that high…maybe only 1300m or so, but enough to bomb along the cliffs to the north with not much turning required…almost all the way to the St. Marcel launch at which point the north wind was becoming stronger and more prevalent, so turned back to St. Hilaire.

The north wind was still increasing up high and it was stabling out with the cu's drying up, and back at St. Hilaire launch it was a bit bumpy, so I only went a few km's to the south before returning and landing at the Lumbin LZ (normally it is totally top-landable, but during the festival top-landing is forbidden).  At this point I heard of an accident just to the south both launches where a pilot had had a collapse and crashed into the cliffs, rag-dolling down before coming to a rest on a small ledge.  A helicopter was dispatched to rescue him so we got to watch the action from the LZ.

Back in St. Hilaire (free shuttle back up to launch) it was time to cruise the booths and enjoy the sun…paper airplane competitions, kiting wars, films every night, and the paramotor guys have been going all day.  And there's 3 more days of the festival!  Check out my photos here, or Jim and Colleen's photos here.

Photos of the trip!

After a rather bumpy flight to Geneva (courtesy of the remains of Tropical Storm Leslie) I'm now in Europe for the next 4 weeks!  Met up with Alex in Annecy and had a couple of flights off Entrevernes (the morning side) and Forclaz (the afternoon side).  Nothing XC-able as it was strong-ish north wind, but nice to get to see what the place has to offer on an XC day.  Fortunately I missed the rain by 1 day so it was nice and sunny, which is nice when staying in a tent :)

With the north wind we decided to try Passy and the Plaine Joux launch since it is south-facing, with a huge mountain behind it to block the north winds.  Met up with Denis Cortella and then we did a petit tour of the cliffs behind and to the west of launch.

Plaine Joux faces directly onto the north side of Mont Blanc, and it's right in your face.  This is a very scenic site, not only because of the rock cliffs behind launch, but also because you can see the snow and glaciers of the Mont Blanc even from this far away.  And you can fly to Plaine Joux from Chamonix...we watched some gliders come from the Mont Blanc direction.  With all the mountain ranges going in all different directions, I can see how pilots here can easily do 200km in the spring...much easier to do this here vs. Western Canada, where we have limited retrieve access to our mountain ranges.

Then it was time to fly the mid-launch at Mont Blanc.  The winds were predicted to be light and it was high-pressure so it seemed like a good choice.  We saw many pilots flying from the top launch, but since we didn't have crampons etc to access the snowfield we opted for the lower mid-launch.  A bit hard to get away from launch due to the stability and all the gondola wires to avoid; I eventually flew upwind, and then downwind, to find a slope that was working without all the obstacles and traffic.  Alex joined me and we flew to the Mer de Glace and the Grand Dru, which was totally awesome...I've never seen a glacier like that before!  We even had the pleasure of watching a huge rockfall on the way back, where a car-sized rock broke loose and fell down the mountain, obliterating a mountaineering traversing track (fortunately there wasn't anyone using it at the time), and breaking into several pieces.  The amazing thing about this rockfall was that it didn't tumble end-over-end, but rather slid on the ice and snow like a toboggan.

Amazingly, we met Matt Senior in Chamonix that evening; he will also be at the Coupe Icare before heading to the German Open.  Tomorrow we plan to head back to Annecy for some hiking and maybe some more flying, before continuing south to St. Hilaire and the festival which starts on Thursday.  And if the weather looks good we hope to also head to northern Italy for the German Open.
No comments:

Well we gave it the ol' college try, but alas the winds were too strong for safe XC flying so the day was cancelled.  A few pilots braved the winds and flew to Otto's Peak, with at least one (acro) pilot reporting wild conditions as he was coming in to land at the festival grounds.  A later group who went up at 3pm reported 30-35kph on launch; only Honza flew that time and went to the Pioneer Mountains and back, as only Honza can do!

This has been a really windy 2 weeks for Sun Valley.  This is my 5th trip here, and on previous trips (at the same time of year) there has been wind on some days, but it's been flyable and XCable a good portion of the time.  Apparently this stretch of wind, this time of year, is the worst the locals have seen in years.  Fortunately Sun Valley is an excellent place to hang out and do other things on the unflyable days...it's called Sun Valley for a reason!

We just did the draws for a couple of prizes: the week-long condo stay in Annecy (valued at 500 Euro) went to Bill Belcourt; the runner-up prize, the last GoPro, went to Gavin McClurg.  All the money raised goes towards Kinsley Wong's medical bills.

A big thank-you to Mike Pfau who spent months (years) organizing both comps and dealing with all the issues that go with running a comp.  He had a large contingent of volunteers to help out with things such as retrieve, safety, food/beer, plus the mentoring talks offered during the OD comp.  Thanks also to the locals such as Nate, Farmer, and Gavin for offering their local knowledge plus essential things like showers :)  Despite the winds this time around, I had a great time, and I really hope Mike continues to offer comps in Sun Valley.  When this place is on, it's really ON!!
No comments: 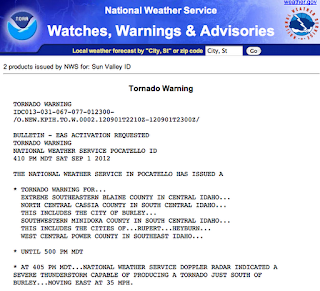 So we've got a tornado warning up for Burley, which is directly south of us in the flats.  And it's currently thunderstorming overhead, and the previous cell dropped 4" of hail on the highway and caused a traffic accident.  Wild weather!

Another no-XC day due to high winds aloft and forecast thunderstorms.  But since they weren't forecast to develop until the afternoon, Mike put up a GoPro as a prize in another morning spot landing contest.

I wasn't in the mood for a sled ride but went up to help others get off the hill, and it was nice and windy by the time I got back down to the LZ...a nice towering cu was developing close to Galena Pass and starting to drop out virga and suck some nice wind as the final pilots landed.  Then time to watch the annual Wagon Days parade and unload the 60 cases/720 bottles of wine delivered to HQ for distribution to the local SAR, courtesy of Guy Anderson wines.