Today was a tough day to go places and get high.  Even though I only ended up in Agassiz, it took me  over 4 hours to eventually get there!   Cloudbase did eventually lift to 1600m, but only in certain spots, and with the Fraser River water level quite high, the crossing over to Bridal was not a gimmee. I opted to land at the school in Agassiz and get some A&W onion rings instead :) 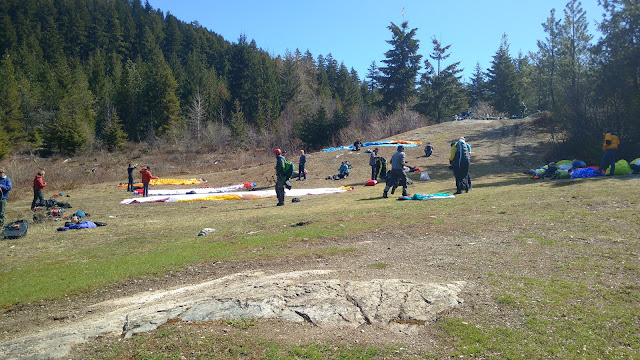 First trip to Pemberton for 2019 and it turned into a really nice day; lots of pilots showed up!  The snow in the valley bottom up Pemberton Meadows had just melted as the sun was now high enough in the sky to shine into the valley, but the Pass itself was still fully snowed-in.  Light north winds made the run out to North Creek easy, but it was cold even though we were only getting to 2700m!


Had a nice low save over by the mountain bike parking lot and made it back to launch to top-land and drive Paddy's truck down.  The snow on the road is almost gone, there is just a few patches left which the trucks will make short work of in a week, then we can drive all the way to lower launch!

It was an awesome-looking day with beautiful cu's, but there was a bit of north wind forecast, and you could see it in the slightly-bent-over clouds in the Fraser Valley.  But we were hoping it was manageable and would allow us to fly XC (usually north wind in the Fraser Valley means XC won't be as good, or rough).

The new launch carpet looks fantastic and covers pretty much the entire launch area, many thanks to the crew who installed it last week!

It was cold up at 1300 m (cloudbase at 12:30 pm) and the first people to fly west to Sasquatch mountain reported it was very rough and turbulent, as well as windy from the north, so it didn't sound too fun.  But a few people braved the roughness and flew to Dewdney or Mt. St. Benedict and back, while I turned around at Harrison Knob to slowly climb back up over the construction site and back over launch.  Cloudbase was slowly climbing, but the north wind wasn't backing off, in fact it seemed to be strengthening, so I imagined a run to Agassiz Mountain or Bear Mountain would be as rough as Sasquatch Mountain was.

But cloubase was getting higher as the afternoon went on, and with the north wind we realized that we would have a pretty easy flight to Bridal, direct, simply by getting high at launch and pointing at the Bridal launch.  Finally got to 1850 m over Woodside and did the direct line to Bridal launch with Alex and Peter, while a crew drove over to Bridal to join us.

Upon arriving at Bridal Alex reported a hang glider on launch (!), shortly thereafter he launched and flew down to the Bridal LZ, where he clipped the windsock and bent/broke a downtube.  Apparently he is a novice HG pilot from Agassiz who had heard of HGs flying from Bridal back in the day, and found the launch after some wrong turns on the logging roads up.  It's too bad there aren't more HG pilots locally for him to learn with and he's more-or-less forced to DIY.  Even flying with the PGs would be useful for him.

It was still north wind at Bridal but a tad less rough vs. the Woodside side.  Cold though!, and spending hours at 1600+ m and my (admittedly expired) hand-warmers stopped working about halfway through the flight.  Cheam was spectacular with the fresh snowfall and the trees still had snow in the boughs, it's still winter in the mountains!

With the return of spring comes the return of bald eagles mating and finding spots to nest.  There are lots of juveniles out this time of year and they are very curious and will come right up to you when thermalling if you remain predictable.  An immature bald eagle joined me near Archibald and we were wingtip to wingtip as we thermalled up to 1800 m.  I actually had to fly a bit faster than usual to keep up with him/her but it was great fun to be banked up, going up, with a friendly eagle only a few feet away.

Finally after almost 5 hours I was pretty cold and tired and ready to land, and Paddy's truck was on launch, needing to be driven down since we didn't have a driver, nor a retrieve vehicle arranged.  Both Alex and I looked at top-landing, but with the strong NE wind it was tough to come in low enough over the rock to make the landing...we kept getting boosted up at the last minute by the abundant thermals coming off the cliff face.  You needed to come at it almost from below launch and use the lift to pop up at the right instant.  Unfortunately if you get it wrong you're in the trees or cliff, since doing a top-landing approach

from that direction involves coming over a sheer cliff instead of more friendly trees if you are coming in from the traditional side.  So after a few tries we gave up, at which point Peter did a few tries and managed to get it in (not prettily, but it did the trick), saving us a walk up to get the truck.  Many thanks Peter!
No comments:
Newer Posts Older Posts Home
Subscribe to: Posts (Atom)