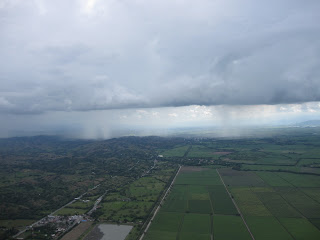 It was sunny in the morning, which meant it would probably OD in the afternoon due to all the moisture in the valley.  Task was to the antennas again, then to Toro launch (another launch to the north of our launch), then southeast across the valley to goal at an airfield about 75km away.

It was still quite shady on the mountain range so it was slow going to the Toro TP, and I made sure to stop at every chance and tank up.  I could see the sun coming from the north so it was just a matter of surviving until the sun hit Toro, and then it went off everywhere.  All of a sudden it was more racy conditions, both for the comp and also because it was gonna OD at some point and shut us down.

There was a huge fire in the middle of the valley (locals burning a maize field) so I headed for that, and was rewarded with a nice climb to cloudbase.  While going up I was being hit with charred bits of maize plants and I could see bits being sucked into my cell openings.  But it was rapidly ODing too and we still had about 30km to go.

Amir and I continued southeast on the flats but the shade got us about 20km away from goal.  It had started raining in front of us so we knew it was getting close to landing time.  Amir and I chose different LZ's...I saw one further along with pilots already landing, and was rewarded with a nice mud-water-landing as the tall grass was hiding the fact it was a flooded field.

Fortunately my sneakers took the brunt and I was able to keep the glider mostly dry and clean :)  It was a race to pack up before the skies let loose, and we were able to get under cover at a roadside convenience store before the deluge started.  Thunder and lightening and torrential rain for about 30 minutes and we were glad to be under cover!  I had seen a couple of pilots land way out in the middle of fields, away from any cover, and knew they were getting wet!

It was still raining by the time the retrieve bus came by and we got the news that about 10 people had made goal.  There were 2 reserve tosses: a Colombian pilot chucked near the antennas, and Stefan Wyss chucked on final glide into goal.  Both are OK!

I think I did pretty well for the day landing about 20 km short; I think only a few made it past me (other than the goal-makers at least).  I had a lot of fun flying the flatlands today; it was a nice change to have clear air all around me and not have to worry about terrain or powerlines.  Fun task!

Pics can be found here.