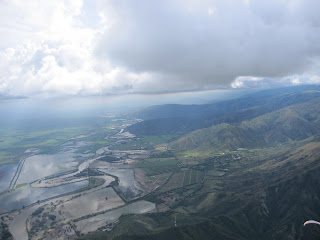 Pics from last night and today are here.

Day 1 of the PWC and the weather was quite different from yesterday.  Lots of high clouds above the cu's, and it was forecast to be shady to the south and sunnier and higher cloudbase to the north.  So a task was set that took us south (into the shade), then back north to Santa Ana, for a total distance of 121km (or 90km once the TP cylinders are taken into account).

Launch was a bit a of a cluster as launching conditions were light, pilots were having terrible launches or full-on duffing, and then they were allowed to re-set up while the rest of us waited in line.  I would think you get one chance, and if you blow it, you go to the back of the line.  Because of this it took forever to get everyone off launch.

Once off launch it was very light conditions and patience was required.  We managed to make our way to the antennas (very slowly) and then we had to hang around La Union for the exit start.  Fortunately the cloudsuck was present which helped things a lot, and then the race was on.

The westerly seabreeze had come in big time and the mountains weren't working, so a bunch of us got flushed out towards the flats where it was working better.  Made our way south past Roldanillo and into the shade, where we had to get past the mine and to the giant lake that's the result of the local flooding.

I got very low at one point, and was reduced to having only enough altitude to make one pass on a small 100' hill before I would have to land, when I saw birds thermalling out over the hill.  Saved by the birds, and back up to cloudbase!  But the shade was fast approaching and after tagging the turnpoint, a couple of serial gliders and myself were running for the sun.  Not far enough when the lift disappeared and I was reduced to ridge soaring some small hills in the hopes a thermal would break off and get me out of there.  However the fields in the lee of the hills were either flooded or sugarcane, and I wasn't able to get high enough to make it over all these obstacles and continue onwards.  So, after ridge soaring for about 30 minutes but not getting anywhere in the increasing overcast I opted to land next to the main road and get it over with 40km under my belt.

So far it appears to be about 35-40 pilots in goal.  There's a large cluster of pilots who went down around the 50-60km mark, but if appears if you could get past that, you were in goal.  It was a slow day though, 2.5 hours for the leaders and over 3 hours for the last people in goal.  So far it appears I'm near the bottom of the results list for today, but that's OK and I have almost nowhere to go but up :)