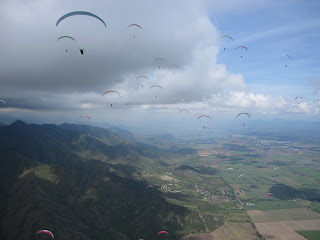 More pics can be found here.

I had a much better day today compared to yesterday.  Didn't make goal, but got 98km and had an epic walkout from the back of beyond.

Last day of the comp and the organizers decided another monster task was in order.  So a 173km (110km actual distance) task was set for a cat's cradle of Valle de Cauca.

I was one of the first to launch and it was a good thing, since after I launched it started lightly blowing down and most of the comp gliders were unable (or unwilling) to forward launch.  Many blown launches, and much pushing ensued, while those of us who had launched early were circling around overhead wondering what the heck was going on down there.

The sky was so empty it was relaxing to get to the start and boat around before the armada got around to joining us over Roldanillo, so I only had to deal with the chaos of the start gaggle for 20 minutes vs. the usual 50-60min.  Once the race had begun it was a race north to La Union to tank up before hitting the turnpoint just north, and then it  was the long glide across the valley.

I got low at La Union which cost me about 30 minutes (important for later in the flight) and by the time I got out of there I was pretty much by myself except for a couple of other serial gliders.  On the way for valley crossing #1 heard on the radio that Keiko had tossed her reserve (in fact we had 3 reserves tossed today in total).  Jim, Daniel, and I flew together for the next 20km or so, until it came time to re-cross the valley for Bolivar.  This crossing was more difficult than the first one since it was into wind and there were less clouds to guide me across.  But able to cross and tank up over Roldanillo, which got me high enough to re-cross the valley for the 3rd time for the final run up north to Obando.

It was about 16:30 and the task deadline was 17:30, and I still had 34km to go.  The clouds were dying and it was going to be close whether I'd get high enough to get the last bit or run out of usable daylight.  17:00 and I was still 20km short of goal and I was sinking out in a small valley off the main Valle de Cauca, with little in the way of civilization.

As I sunk lower into the valley the wind picked up, so I was able to ridge soar my way another 8km or so but as I was doing this I knew it was at the expense of an easy retrieve, as I was heading deeper into no-man's land.  Jim and Daniel were higher than me and able to make it back into the main valley, while I landed out about 12km from goal. 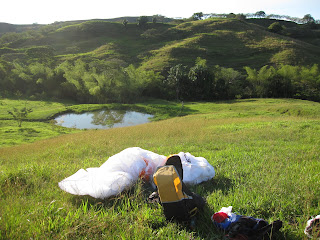 But my landing zone was pretty remote.  I had sidehilled it at the bottom of the ridge and had seen a house a couple of km's to my west, but when I got there it was inhabited by 3 children (all less than 10 years old) and no adults in sight.  They weren't able to help me with a phone or directions to Obando (and there was no cell coverage, and I hadn't been able to get the Tigo network to accept Spot text messages), so I had to continue walking for another house I could see about 5km away.

It was now dark and still no cell reception, so I kept walking until I came upon a truck that took me towards civilization and the retrieve which was looking for me.  Good thing I had my headlamp!  Back at HQ by 8pm to find out that about 85 people had made goal.

I'm pretty happy about my flight; even though I didn't make goal I had a pretty cool flight with all the successful valley crossings, and the walkout wasn't that bad.  And it was a nice end to the comp to fly the furthest I have so far in the several weeks I've been here.  The skies were epic today and the winds weren't too bad.  Had I not lost those 30 minutes at La Union I probably would have had enough usable daylight for the one more thermal climb I needed to make goal.

PS Man the PWC scoring system really kills you if you fail to make goal.  Almost 7 hours of work and 98km, all for 328 points!

Tomorrow is a free-flying day and the awards are tomorrow night.  I think I was able to stay in the top 100 overall, and 7th in the women's division.  The PWC pilot talent here is incredible, and it's very humbling and a privilege to be flying with such good pilots.