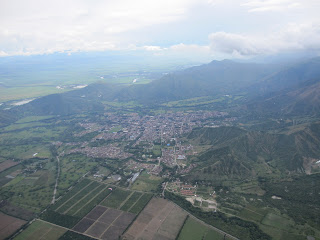 It's a good thing Nicky told me that rain in the mornings is common, otherwise I would have been discouraged by what I saw when I got up.  Cloudy and sprinkling.

We didn't actually head up to launch until well after 9am; we're on Colombian time!  And when we got to launch it was socked in and lightly blowing down.  But we were here to fly so wait we did.

Launch is a grassy slope and you can launch from up top, down below in the bowl, or on a small knoll to the north.  Launch faces pretty much due east, so it's a morning site.  The locals have built brand-new bathrooms on launch and running water so you can even get your ballast up top and not have to hoof it up the stairs.

It eventually cleared, but late for this site, after 11am, and I didn't actually launch until 1pm.  The skies were clearing but ODing at the same time so it was a question of whether to fly down, or drive down (the road was washed out in many spots due to recent flooding and mudslides).  Even though it was mainly overcast, it was plenty thermic close in and easy to stay up.  I flew south to Roldanillo (about 10km) and landed at the soccer field in town, within walking distance of the town square and my hotel.  Children galore and as you come in to land you have to dodge the kids.  As soon as you touch down you're surrounded by them and can't even get to your glider.  But they know the drill and know to stay off the lines.

The thermals (on this day at least) were smooth, wide, and perfect.  About 2m/s today; Amir says they get to 3m/s on sunny days.  Cloubase varied :) from just above launch at 1600m to 2000m.  And I was completely comfortable in shorts, t-shirt, jacket, and uninsulated gloves.  I could get used to this!

I'll be posting pics too.  You'll be able to find them here.