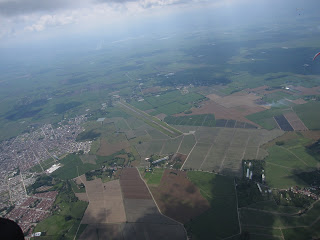 I think after yesterday's long task with nobody in goal and long retrieves, the organizers wanted to give us an "easier" day.  So a 85km task was called and the start was about 1 hour earlier than previous days.

Since we were 1 hour earlier in the day, it was slower climbs at the beginning of the flight and I got low after the start, heading north into the antennas low and into the wind (not good).  But I was able to get myself out of the hole and back up to cloudbase (about 2200m) and get myself sorted for the flatland flying part.  Lots of cloudflying at the start, and I'm sure it was happening all over the courseline.

It was pretty much no wind which was a good thing, since the deal was, you had to tag the TP (Tulua airport), then exit it, then re-tag it from at least 15km away (from any direction), and then proceed to the same TP which was now goal.  This meant that we would have a chance to check the goal out before actually having to glide to it, look for obstacles, see what the wind was doing on the ground, areas of sink on the way in, etc.  I noticed as I was gliding in for the TP that it appeared to be quite sinky just north of the runway so I filed that away for the return trip.

Punching back north to get the 15km was easy, and the lead gaggle passed me as I was thermalling my way up to cloudbase which had risen to 2400m.  Returning to what was now goal was also easy, although I made sure to stay high because of the sink on the way there I had noticed from the time before, and ended up coming over goal with about 1000' to spare.  I'd rather that than landing short, as I watched at least one pilot ahead of me dirt it about 1km short.

It appears to be around 110 pilots in goal.  Many happy faces and the retrieve trucks were all full leaving the airport.  I was pretty slow, 3:11, but better late than never :)  It was a really fun task and the flatland flying was epic...clouds where you wanted them, plenty of lift, and multiple route choices to get to goal.  It was the kind of day where you could have flown 130km easy on the flats, had it not been a task day.  When it's on, this place is on!