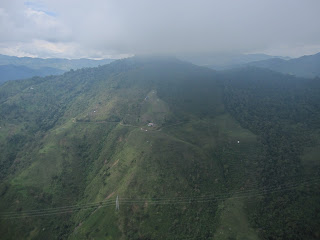 Day 1 of the Roldanillo Open and we started off with an adventure as our truck got a flat tire on the way up to launch.  At first we thought we were gonna have to walk the rest of the way since we didn't have a spare, but the next truck coming behind us had one that we could use, so we eventually made it to launch.

Similar conditions to yesterday, low cloudbase and it spit on us a few times on launch.  But it was clearing up (slowly) so a task was set that took us back and forth between the antennas to the north and Roldanillo to the south, followed by a valley crossing and then into goal (about 77km when you take away the TP cylinder radii).

It was very light conditions so it was important to stick with a gaggle as by yourself there was a good chance of going down.  I got low with Jim Orava once but managed to get myself back up to cloudbase and back in the game.  I didn't see him until later on so I know he got out of there too.  Many people decked it early either right at the start, or on the way to the 1st TP.

When it's overcast conditions, one thing I like to do is hug the terrain to get as much lift as I can.  But between launch and Roldanillo there is a set of high-tension power lines that you have to keep an eye on (see the photo up top).  If you don't and continue to hug the terrain, you can find yourself on the wrong side of them, too low to get over them!  On the way back towards launch from Roldanillo I was terrain-hugging and lost track of them until I saw them, not too far away below me, and had to abandon my hugging plan so I could get to the proper side of them.  At this point the mountain range had completely shaded out and it was the glide to the ground along with most everyone else.

I landed short of the antennas in a small vinyard; I found a small bare patch to put down in so I wouldn't get hung up in the vines.  A very nice boy, Michael, came out to help me and gave me several bunches of grapes from the vines, yummy!

Jim had a close encounter with the power lines as he was terrain-hugging too: he threaded the needle and flew *under* the lines to get to the other side of them!  Those lines are placed in a dangerous spot on the mountainside...just tall enough that they're an issue to cross over if you get low while close-in to the mountain.  It's something I'm gonna have to keep an eye on for the next couple of weeks.

Jim landed a couple of kms away from me, and Amir landed near Roldanillo.  Pawel landed early too.  Nobody made goal today, and only about 20 people made it past the antennas towards the last TP.  I saw it raining over in that direction after I got picked up so I'm guessing had anybody actually made it over there, they would have been landing close to the rain.  So probably a low-points day, but fun nonetheless and the glider is treating me well.