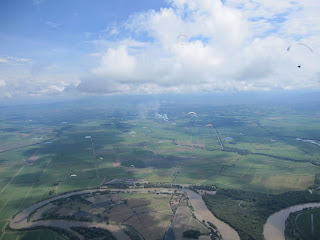 The last day of the Roldanillo Open and many PWC pilots are now in town and free flying today.  Task today was about 84km long, and we thought it would be mostly downwind according to what we saw for winds in the valley from launch.  Wrong!  The winds at first were light north, but as we were waiting for the start south of Roldanillo, the winds turned to southwest as the shade approached.  What I thought would be a pretty easy task soon turned into an into-wind slogfest complete with increasing high clouds.

One of the turnponits was pretty deep into the foothills on the other side of Valle de Cauca, and had it been light winds it would have been a fun place to explore.  But with the SW winds it was a bitch to get back out of there after tagging it, and many pilots didn't make it, dirting as they tried to re-enter the main valley.  Jim and I and a bunch of others managed to scunge our way back out to the main valley to be greeted with lots of shade, dissipated cu's, and looking very dark to the south where goal was sitting about 20-30km away.

The awards ceremony is tonight and I think I'll retain 4th in the women's division and top 10 in the serial class, and hopefully stay in the top 50 overall (that would be nice!).  I really enjoy the flying here; it's a nice mixture of mountains, flatland, and small foothill flying, and there's a healthy local pilot population; today we had a bunch of tandems and students flying before the window opened, and the public comes up the mountain to cheer us on as we launch over their heads.  Even though the weather is not as good compared to last year, we're still flying XC every day.  Now it's time for a couple day's rest before the PWC starts on Sunday.  Tomorrow the organizers have arranged a visit to a local coffee plantation where we can watch coffee production in action, taste-testing, and buy some local coffee.  I'm looking forward to a couple of rest days!