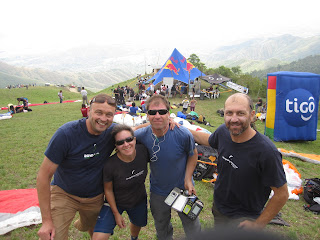 Another long task, ~115km, south to near Palmira in the eastern mountains.  Windy from the southwest meant it would be a long into-wind slog, and after the start (downwind of the antennas) many pilots had a slow flight back to over Roldanillo.  It didn't really look like the flats were working, so I opted to fly the mountain route as long as I could and use them as shelter against the wind, rather than battle it full-strength in the valley.  The going was slow and tough...we had to take every climb to the max in order to make a few km's upwind, and then do it all over again.

South of Tulua (where we landed yesterday) is Cali airspace, so we were restricted to under 2400m after this point (or else we'd get mucho points deducted, or get 0 points if we broke 2450m).  This just added to the difficulty since cloudbase was higher than this, yet we weren't allowed to climb that high to make the going easier.

Just south of Tulua the mountain range bends away from the eventual goal, and many pilots were leaving the mountains to try the flats and hopefully cross to the other side.  But the shade was approaching from the south, and it was actually storm clouds building on courseline.  All I knew was I was slowly going down in the valley winds and restricted altitude gains, and I saw many pilots in the same situation.  Eventually I couldn't make any more headway in the approaching overcast, so looked around for a LZ, and saw a nice soccer field in a small village just north of me.

As I came in to land a good portion of the village came out to watch and greet me.  The village was San Antonio de Piedras (population 300) and one of the village matrons practically dragged me inside her house where she proceeded to stuff me full of fried plantanos and pescados (fish).  For 2 hours she fed me while a huge crowd surrounded the house and was peering inside the windows and doors as she and her family and I attempted to communicate in broken Spanish.  We could see some other pilots getting low but none landed at the soccer field so I had the whole village to myself :) 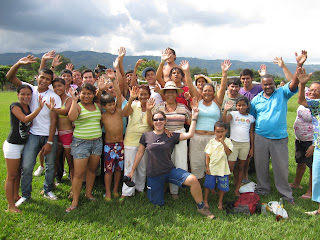 Eventually I convinced them it was time for me to go and get into the retrieve which was searching for me.  They were kind enough to give me a motorcycle ride to the main road where I was able to flag down a retrieve bus and back into town.  Before leaving they asked me if I would return, and if more pilots would be landing at their soccer field anytime soon.  I told them perhaps next year the local competition organizers could make their village a goal for a task!

Meanwhile the task had been stopped due to storm clouds on courseline.  I got 64km, and the leaders I believe got close to 100km.  The whole flight was into a significant headwind so it was very tiring to be pushing speedbar all that time and my legs are kinda jiggly tonight :)