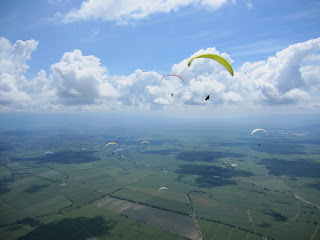 A fantastic day!  Even though I didn't make goal, I had a great flight and flew over some awe-inspiring terrain.

Task was 140km (122km real distance when you take away the TP cylinders) that took us across the valley to the other side, into the small hills, then deeper into the eastern mountains, over a couple of mountain passes, and then back into the main Valle de Cauca for a goalfield at an airstrip.

Initially my flying was very slow and I was low many times.  We had to cross the dreaded swampy area in the middle of the valley, where if you go down, you have a multi-hour hike before you get to a main road, and have to navigate the flooded sugarcane fields.  At one point I got very low in no-man's land and the only dry land I could see was a small hill that was sticking up out of the swamp, so I headed there and was rewarded with a climb up to cloudbase and a glide to the other side of the valley and civilization.

Pilots ended up taking different lines to the turnpoint...some stuck to the mountains and then did a 90 degree bend to cross the valley at it's narrowest, while others flew the flats from the get-go.  My group did a mix, sticking with the mountains until the large flooded lake, and then crossing diagonally.  It was pretty cool to watch all the various gaggles converging on the turnpoint from different angles and directions!

With the valley crossing behind me I was able to speed up and play catch-up.  Heading deeper into the eastern mountains I was able to stay with a gaggle and hop from cloud to cloud, making sure to stay high (cloudbase was getting higher the deeper we went).  As we were flying deeper and deeper into the mountains the underlying terrain started to change...it was starting to become coffee plantations and there was a steep plateau ahead of us we had to jump over.

I was initially below the plateau so didn't know what was up there, until I got a climb up to cloudbase (about 2700m) and saw it.  It looked like a Forbidden City out of an Indiana Jones movie.  It was so incredible to thermal up over this city and fly right over it, and see the plateau dropping off on the other side with the same amount of steepness of the side we had just thermalled up over.  It was so steep I could see spots where a pilot could launch from the city and instantly easily have 800-1000m of altitude over the valley below.

That was definitely the highlight of the flight...I was so busy admiring the view that I neglected to take photos and I hope somebody else did!  It was a sight I'll never forget, that city rising out of the jungle and us flying right over it and off the other side.

At cloudbase again we flew down the other side to the turnpoint in the next valley, noting that it was getting nice and downwind-y.  Getting back to the main valley would be tough as it would be directly into a headwind, with a mountain pass to get back over.

At this point I had caught up with Jim and we were flying upwind to the control turnpoint and the headwind was really catching up with us.  Another serial glider joined us and we tried to get high enough to punch upwind (we got to cloudbase about 2600m), get over the mountain pass, and to the windward side where we hoped there would be lift to get us high enough to tag the last turnpoint and make our way to goal.  But it was not to be as the headwind was punishing and we were getting flushed to the ground.  We tried soaring a small antenna near the pass but no joy and 4 of us landed next to the main highway, for a total distance of around 85km.

In the end nobody made goal (due to lack of lift on final glide) and the closest person was within maybe 1-2km of goal.  For myself, I'm very happy with my flight, not only because I made a respectable distance, but because it was one of the coolest flights I've down in years.  I would love to fly back over that city and explore that terrain a bit more, but you need a high cloudbase in order to get back there, and little wind so you can get back out.