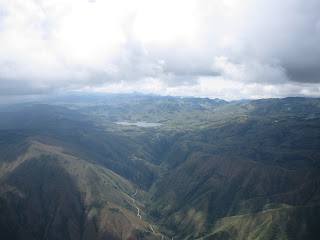 It actually rained on launch for about 20 minutes, so most people were slow about getting their gear out on the wet grass.  But it was task time and a ~78km task was set that took us south towards Tulua, back up north past La Union, and then back to Zarzal.

In the air it was a bit snarly, and the thermals had a definite bite to them that we haven't had in previous days.  And it was windy from the south again, which meant the first leg would be into wind.  Once again I (and most pilots) chose the mountain route, in my case to shield against the wind, and it was slow going with lots of nylon flapping around.  Many collapses and at least one reserve was tossed.

I kept looking out at the flats and didn't see anybody out there, and there were fewer clouds out there than previous days.  But we had to venture out there to tag the Tulua turnpoint and that's when I found the going difficult all of a sudden.  I was flying with Joanna when we went on glide for a cloud, and I wasn't able to stay high enough to connect while she did.  I could see some birds playing around so I flew over to join them, but strangely enough they weren't interested in soaring and just kept flapping and roosting in the trees below.  So I ended up landing in a sugarcane field and had a very hot time of packing up (it was only 1:30pm so the heat of the day) and getting to the main road.  It was weird...all of a sudden I was on the ground from being at cloudbase one glide ago, and couldn't quite figure out why.

I could see other pilots low around me but most of them seemed to get further downwind before I lost track of them and it appears many of them got back up and on course.  But there are many pilots in goal, something like 80 or 85, so my paltry 30km won't count for much.  Amir made goal, and Pawel and Jim had good flights getting 63-68km, good on them!  It was kind of a weird day for me, not like previous days where I felt somewhat competent against the rest of the field, and I'm not quite sure why the flats didn't seem to be working (for me anyways).  Oh well, tomorrow I have a chance to get another good flight in!