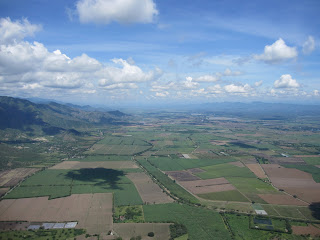 Today was the official practice day for the PWC, and most pilots took advantage of the free flying to explore Valle de Cauca by air.  It was perfect skies and light winds so pilots were flying all over the place.  I opted for a local mellow flight, flying along the mountain range to the antennas, and then flying the flats back towards Roldanillo, playing around over the small foothills that surround the town, maybe 20km.  It was going off everywhere and it was easy to stay up.

The place to be was the soccer stadium in town, which was set up for the official landing zone for today, complete with Red Bull tent, pumping music, and a crown of about 500 locals watching and cheering all the landings.  However, the soccer field was also very thermic and I thermalled out several times just to see if I could.  I also witnessed several accidents as pilots tried to put their gliders in the LZ and failed.  One pilot missed the field and ended up crashing into the nearby tennis/basketball court, with a metal fence breaking his fall (it was all bent when I walked by).  The other pilot was coming in behind me and crashed into the powerlines surrounding the soccer field.  As he hit the powerlines it flashed sparks and a small explosion as the transformer blew, taking out the power to part of the city.  But, both pilots miraculously ended up OK.

Some more pics are now up...you can find them here.

Registration is currently underway, and we've got a dinner party later on.  As part of the comp we'll be issued live trackers after the task briefing tomorrow, so you'll be able to watch the race live at the PWC website.  FYI, last week the race usually started between 12:15 and 13:00 local time (GMT -5), so use that info to figure out when the races will roughly start in your time zone.