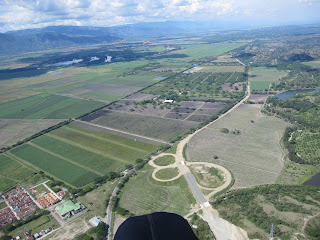 A fantastic day with sun and cu's; it's drying out!

Task today was south to past Roldanillo, back to the antennas, across the valley, and to goal in Zarzal, about 87km.  I found the task quite easy...maybe it was the mindset of just flying XC with my friends, and having a fun day.  It wasn't hard with the perfect skies, cu's, light winds, and 150+ pilots to mark thermals.  Jim and I flew for a lot of the flight, and we made sure to tank up when we needed to, especially over the flats.  In the end I made goal along with about 80 other pilots, in 2hours 14minutes.  Jim was with me at the end until he kept flying away from goal since his GPS was telling him the wrong thing, and ended up coming in late.  Amir and Pawel also made goal, so all the Canucks were very happy to be in the goal field enjoying the landings.

In the goal field it was switchy winds, and a thermal broke off just as I was on final, causing me to come in downwind.  Of course the landing strip was covered with pilots packing up, so I aimed for what I thought was the grassy median on the sides, only to find it was a ditch full of water, hidden by the grass.  Once again I had a water landing, up to my thighs!  But the glider stayed dry and the important parts of the harness (ie. the reserve) stayed dry too :)  But I have another gear explosion going on in the hotel room as I'm cleaning mud and drying everything else off :)

This is what the flying in Roldanillo is supposedly like according to those who have been here in previous years.  Hopefully this is the start of a dry spell, and we'll have more fantastic days like today.  We could have flown another 50km easily, the flying was that easy!  In fact a bunch of people made goal, and then thermalled out and flew back to Roldanillo to save the retrieve in the goal bus.