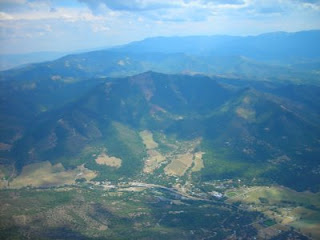 Day 1 of the WCPC and the weather wasn’t looking that great. High cloud, and where it was blue, it was going off in a big way. It looked like it would be a light day unless it blue’d up, and then it would have to be a quick flight before the T-storms came in. The initial forest fire from yesterday's storm was almost out by this morning, and the other lightening strike on Burnt (we saw the flames last night, so there were 2 separate strikes that started fires) was on the way to being out too. So the task committee called a 45 km task towards Grant’s Pass to the Troon Winery LZ, via Rabies and Burnt.

When I launched I had to fight a bit to get high, but was able to get to about 5300’ at one point. But of course it was too early (the start hadn’t happened yet) and when the start came I was low again. When I eventually got high again I decided to cross to Rabies, even though I wasn’t as high as I wanted to be. It was a choice between leaving low-ish, but with a group to help me along on the other side, or staying around and getting higher, but being alone for the crossing and subsequent flying.

The crossing was OK but the wind at Rabies ridge was horrendous and I arrived too low to get to the upwind side of the ridge (I actually had about 20' to clear the trees), and the lee was nasty. After my glider started doing the funky chicken I decided a tree-landing was not what I wanted, so I turned tail and landed at the Hunter LZ. About 15 other pilots eventually landed with me, while the group that had gotten across with more height were able to get away, tag both Rabies and Burnt, and get to the high country to head to Grant’s Pass.

Of the group that made it to the high country, many landed short of Grant’s Pass due to the extreme winds and hard climbs. Others made Grant’s Pass but landed short of goal after the final glides were worse than expected (downwind at 6:1 wasn’t enough apparently). In the end, somewhere between 6-10 people made goal. I think due to the number of people landing in the Hunter LZ (within minimum distance) it won’t be a fully valid 1000 point day.

I think had we waited another 30 minutes it would have been easier. I watched later pilots make the crossing easier than I had, and the lift seemed more abundant and the winds less later on. And the OD didn’t come like yesterday; it stayed south around Shasta and Mt. Ashland and no T-storms either. The good thing about only making minimum distance today is that I have no place to go but up in the future!