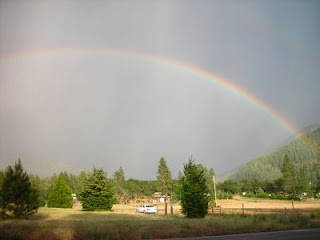 The skies were generally overcast and lift was light, so when the window opened I just sat around and watched the gliders out front struggle to get up. I didn’t feel like battling for 1 hour in a start gaggle that was to stay over launch anyways, so I didn’t launch until about 20 minutes before the start. Good call as I got high just as the start happened, and I was glider #5 on the glide over to Rabies Ridge. However, the other 4 gliders were comp gliders and able to glide further back to the high country, so I had to wait for gaggle #2 to show up to use them as thermal markers.

The gaggles at Rabies Ridge scratched for about 1 hour, not getting very high, and nothing was really working. The deep-in gaggle and the out-front gaggle would swap positions every so often, as everyone was hoping it was better where they weren’t. But nothing was really working until I left the ridge towards Longswords, and I found a thermal that was pretty strong but drifting me away from the high country. Oh well it’s better than nothing so I stuck with it, and eventually got high enough to try flying up towards Grant’s Pass via the road and the ridges that come out from the high country.

Meredyth and I flew the ridges until Rabies Peak, where a nice cloud was forming despite the high overcast. Meredyth left to try something out front while Dave Wheeler and I stuck on the ridge, which eventually got us high enough to connect with the cloud and thus the high country. At that point it was point to the first TP and tag it with little turning necessary.

The weather was deteriorating and a couple of T-storms were in the area. One was approaching the valley from the Applegate Dam area just as I tagged the 1st TP, so I was glad to be running away from it and towards nicer and bluer skies. I was becoming concerned that the weather would deteriorate too much and the task would be stopped, so I stopped thermalling and just pointed it at Rabies to get as much distance as I could before that (probably) happened.

I was going up under a nice cloudstreet and the storm was downwind of me and I was getting further and further away from it, and tagged Rabies no problem and then I had goal in Jacksonville on glide (I was at cloudbase). I could see pilots ahead of me, but they were way low, so I knew I'd at least get further than them. At that point Mike Haley got on the radio and stopped the task due to the approaching T-storm. Agghh! On glide to goal and now making goal isn’t going to count, and those ahead of me but too low to make goal will get more points. I was still high enough to turn around and land at the Hunter LZ, which I could see had people in it, so I opted to turn around and land there, vs. landing in an unknown goal field that may still be empty (I didn’t hear any chatter about people making goal yet). Tracklog is here.

Landed at the Hunter LZ with a few other pilots, and we watched the storm develop and pass by in the high country. Only 1 person in goal at the time the task was stopped (Matt Beechinor), and most of the lead gaggle had landed short of goal. Eric landed about 1-2 km short in a tree (but he was OK:)

I think it was a good call to stop the task. I was pretty much the last and highest person in the air still on course, and I was definitely feeling a bit leery of the approaching storm. I’m glad I was running away from it and we didn’t have to fly further in the wrong direction; had the 1st TP been Grant’s Pass Peak instead, I probably wouldn’t have chosen to continue to fly and gone out to land instead. Even though it sucks for me personally (being on glide for goal and then being denied it due to a task stoppage), I support Mike’s decision to stop the task. There could have been other pilots behind me I wasn’t aware of, and they could have been in trouble had they hung around too much longer around the 1st TP. It was definitely a day to keep an eye on!