WCPC: Day 3 and the task is cancelled

Camping on mid-launch, we woke up to see blue skies above and clouds below. All around us were huge cu's that either never dissipated from yesterday, or had just blown up by 8am (!). With skies like that and the forecast for more T-storms, I figured it would be an early day and a high probability of OD'ing with subsequent rain and lightening.

Up on launch it was already good (Eric launched around 10am to check his lines after his tree landing yesterday, and was able to stay up and top-land) so an early task to Grant's Pass and to a local winery was called (43 km). There were huge cu's to the south which were already towering towards the backside of launch, and it looked like it was going to shade launch quickly, so Veronica and I launched #1 and #3 respectively just to get in the air and not be stuck on launch if it shaded out and got light launch cycles.

The air was pretty nice and cu's were forming over launch about 6200', and I was able to stay up easily until the race start at 12:45pm. But the skies were getting nastier and nastier, and a large cu-nim was forming to the west of the course line, and another cu-nim was coming at launch from the south. I didn't really like what the skies were turning into. So I crossed over to Rabies ridge with the first gaggle, and then decided it was too scary-looking to continue flying, and headed out to Longswords to land. 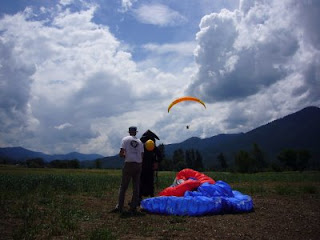 It was going up everywhere, and pilots were still in the air, headed for Grant's Pass, using both the high ground and also the valley. It was hard to get down at the winery but I landed at about 1:15pm and was pretty glad to be on the ground. Virga was all over the place and the skies were becoming overcast with embedded cu-nims. After some chatter on the radio about the quickly changing conditions, a phone call to Mike about what I and the other pilots were seeing from the ground, and eventual lightening being spotted behind launch, Mike officially stopped the task at 1:42pm.

Because the task was stopped before 1.5 hours of the task had elapsed, and nobody had made goal yet, the task was actually cancelled, which means it doesn't count and no scoring will take place. I think it was a good call to stop the task, although I think it should have been stopped 20 minutes sooner. Despite it looking OK towards Grant's Pass, it was getting nasty all around, and there was a cu-nim headed for the goal field. In the end several pilots got rained on while they packed up, although nobody got gust-fronted. One pilot side-hill landed in the bowl behind Rabies Ridge and had to hike down (no glide to a LZ I'm guessing).

I'm quite comfortable with my decision to land early and not continue flying. I didn't like what the skies were looking like and it's too easy to be under a large cloud and not be able to see what it's really doing from underneath it. Many of the other pilots who landed at Longswords agreed with me and landed for much the same reasons. Every pilot has to make their own decision and not have to rely on the safety committee for guidance. Today was a sketchy day and I'm sure there will be a lot of discussion at tomorrow's pilot meeting about today's flying conditions.