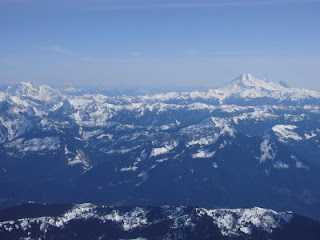 Another high cloudbase day in the Fraser Valley, the clouds we could see were about 12,000' or so. Today we had borrowed a 4 wheel drive vehicle and packed it with 4 pilots from Vancouver.

Up on launch it was very leeside but flyable, since Miguel, Wade, and Fedja had been on launch for a while already and Miguel had flown and top-landed. We were able to launch from the picnic table and fly around to the east of launch, to catch the leeside house thermal that we knew was there.

I found it a bit hard initially to climb out since the lift down low was very weak and the climbs weren't in the usual spots, but once established in a nice climb I was able to make my way to the Saddle. Alex had launched before me and was reporting strong SSE winds up high, so I was prepared for the push of wind that greeted me as I rose above the Saddle just to the west of Archibald. It was rather rough and not as nice as yesterday, and I found myself controlling the glider a lot more as it continually wanted to be in places other than over my head. Many pilots who normally don't have collapses reported having them, and keeping mine open was a full-time job at times. I think staying low was better as the lift wasn't as rough below mountain height.

As I approached Saddle height the climb I was in suddenly banked back over the Fraser Valley and increased in strength and smoothed out, and I was rocketing up past yesterday's altitude gains, all the way to 2665m (8800'...it's class E airspace until 9000'). But that doesn't mean there won't be airplanes around so you have to keep eyes and ears out! All the while I was thermalling over the highway and getting pushed north, with a very strong SSE wind up high. I had single digit groundspeeds for the most part. I'm sure the ride kept going up to 11-12,000' but I abandoned it to try to push back to the mountains and get to the windward side of Archibald, to see what more was in store back there.

The view was incredible with the snow-topped mountains going off in the distance to the south, and I was able to see Chilliwack Lake at the end of Chilliwack Valley. Mt. Baker was huge and seemed very close. It was mostly blue with a few scuds of cirrus and the odd cu in the backcountry.

Getting back to Archibald took a *long* time with the winds and the fact it wasn't the smoothest air to fly back into, with 7000' peaks upwind of me and throwing off nasty rotor. When I got to the windward side of Archibald I once again found the elevator to the moon, rode it up, and found myself again over the Fraser River. Had retrieve not been an issue (our vehicle was on top and we weren't sure of the top-landing in leeside) I could have crossed the valley and gone for Woodside. But I elected to stay local just in case the retrieve was going to be an issue.

Heading over to Cheam was not very fun with the rotor from the SSE so I abandoned that idea and decided to mess about between Archibald and Upper launch, playing with the way the thermals were leaning today. I saw several pilots fly to Ludwig and Gloria, but they were much lower than me, and not in the rotor of the wind up high, so they weren't having any issues making XC distances. It was only up high that you didn't want to be anywhere near the mountains (and in fact, was continually being pushed over the valley).

Eventually I decided to explore the possibility of top-landing but I didn't like the conditions, still decidedly east on launch and very lifty. So I elected to land in the LZ, which was reporting 0 wind. People were landing in every direction and nobody was having issues, so for fun I landed the opposite way I normally do, landing facing Hope after an approach over the highway and driving range.

Derek's vehicle was in the LZ and he generously drove up for retrieval. As we were waiting for the vehicles to be driven down we saw another glider pop over launch and stay up for about 30 minutes before landing in the LZ too. It was after 7:30pm by then and it was still probably flyable even then!

Total airtime about 2:15, FAI triangle 11 km (whoop whoop!), and high altitude gains like yesterday. I'm always excited when I see the forecast calling for NE winds in the valley, as long as they aren't too strong, as I find the best high-altitude flying at Bridal is in NE conditions. The thermals are stronger and go higher due to the drier air that is being pumped into the valley by the NE winds, and everything is opposite of what you normally fly. It's a nice change from the typical inflow conditions we get in summer! The only thing is sometimes the NE winds are too strong and it's too unsafe to launch or fly, but I've noticed in the past few years we've gotten used to flying Bridal in NE. It makes you wonder just how often is Bridal flyable?

The end of the flight wasn't the end of our day however...our borrowed vehicle broke down on the Port Mann bridge and we managed to coast it over the bridge to the Vancouver side, and had lots of company in the form of police, city maintenance, and BCAA, before we finally made it back home after midnight. A long day after a rough day of flying!