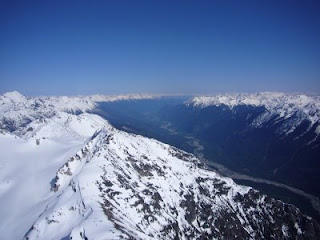 What an awesome day!

We arrived in Pemberton this morning after camping on the Duffy Lake road and it was a perfect blue sky day. XC Skies was reporting light winds and not much chance of Whistler Express so Alex and I talked about the 100km OR.

This flight needs several things to come together: light north winds, enough daylight, not too stable but not too unstable, and a low Lilloet River. This last one is especially important as past the 25 km mark (Hurley) you run out of regular LZ's and have to rely on either a) cutblocks on the side of the mountains, or b) sandbars on the river. Usually this time of year the Lilloet is rising and the sandbars disappear, but this year it's late and the river is still very low with tonnes of sandbars to land on.

Landing on a sandbar is one thing, but if you land anywhere past Hurley, you're gonna be walking for a bit since the road is not well-travelled. I imagine cell reception sucks there too. Good thing I have a SPOT!

Anyways, things were looking good for the attempt so Alex and I got our stuff ready just in case it looked good once we got to the Hurley Gap. Launched about 1:30pm and we were off.

Topped out at the antennas about 2700m and headed north for Hurley. Getting there was pretty easy, a slight headwind but nothing to worry about. There weren't any clouds so no worries about OD or getting sucked into a cloud!

At Hurley (the 25 km mark) we got our highest climb of the day, just above 3000m, and we looked at the gap. This is where the road to Goldbridge is, and it's pretty wide. And at the other side it's pretty low-angle, with a long glide to the riverbed sandbars. You don't want to do this glide starting low!

Mike Sadan was with us and we decided to go for it. Started across the gap and the north wind all of a sudden picked up. Progress across the gap was slow, and I thought about turning back as didn't look like it was gonna work. But Alex and Mike were still with me (and lower!) so I knew I was OK as long as I stayed higher than them!

Finally across the gap and it was fully windy; the thermals were all leaned over back into the gap so I had to find strong ones, circle a bit in them, and then push back upwind to find another one, and slowly make my way north of the gap. Initially I thought the strong wind was just the Hurley Gap "sucking" wind into it, and it would subside the further north we got, but nope it didn't happen! 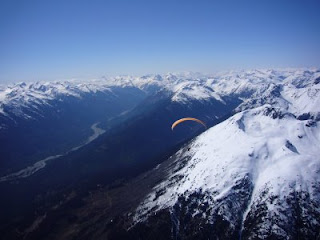 Alex and I slowly made our way north of the gap and we were now in virgin (for us) territory. Mike Sadan had turned back so it was just the two of us now. For the next 2 bours, we battled the north wind (which turned into a west wind as we flew north and the valley turned more to the west). I made sure to stay high and take it slow; I didn't particulary relish the thought of landing out in this tiger country. Alex was lower than me for most of the flight and almost had to land a few times himself. But we were able to stick it out.

There was another large gap to cross at North Creek but we both managed to cross it, and then it was last bit until we got to Meager Creek. At the 50 km mark the valley splits into a Y (third photo), with the left part of the Y headed towards Squamish, and the right side of the Y headed for the Lilloet Icefields and the Lilloet Glacier. Mount Meager is at this junction too. 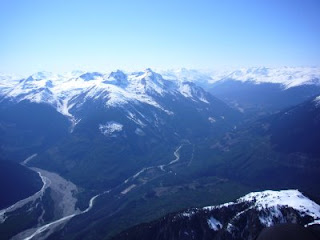 We stopped at the 50 km mark and marvelled at the views. To the north we could see one of the arms of the Lilloet Glacier spilling down into the valley (blocking it), and all around it was snowcapped mountains. No clouds anywhere except in the Interior around the Cariboo so we had perfect views. At the Y junction we also noticed a logging camp set up at the river (third photo, rectangular cutblock next to river). Good to know if you land out that far!

The winds were very strong from the west here so we were able to ridge soar indefinitely at the junction. But it was 5pm and we still had 50 km to go with the day mellowing out. So after drinking in our fill of the view we turned around.

Getting back was much easier than the flight north, as we had a significant tailwind to push us back. While the flight there was over 3 hours (average groundspeed in the high teens), the return was only 2 (groundspeeds in the high 40's and low 50's).

Back at Hurley Gap I breathed a bit of sigh of relief that I was now within glide of regular fields and LZ's, and civilization in general! Crossing the gap was easy with the tailwind, and on the other side it was still north, which made the rest of the trip easy.

I was pretty tired by now which is probably why I had my collapse (after 5+ hours in rough air, I wasn't on top of my game). About 8 km from Pemberton I hit a thermal a bit off-side and wasn't on my brakes immediately, which resulted in a massive 60-70% assymetric. Of course it cravatted, and as it wound up into a spiral I leaned away and braked opposite, which caused it to drop back into a full stall. I let up and it surged forward (releasing the cravatte) and rotated about me but I was able to catch it, and after a bunch of controlling the surges and rotations I was back to straight and level flight.

Alex of course was behind me and saw the show. Fortunately I was at 2000m when it happened so I was plenty high, but had I not caught the wind-up-to-spiral when I did, I may have had to throw my reserve. I'd rather not do that in the wilds of Pemberton!

The final 8 km was uneventful and I rounded out my day by crossing the valley to Satellite hill, and to the Community Centre LZ by 7pm. The flight was about 5 1/2 hours so I was totally pooped. Alex landed just before me and promptly collapsed next to his glider, just as tired as me. Tracklog is here. Alex took some photos which are here.

The flight was 104-105 km (Alex pushed back to Pemberton on the way back to get the extra 1 km on me!) and was a first for both of us. We've always wanted to do that flight but there's always something wrong with the conditions. This time however it was perfect! Had the wind been a bit stronger north we probably wouldn't have been able to do the Hurley Gap crossing, and had the river been flooding we wouldn't have had any LZ's. And it was a blue day so no clouds to worry about!

The day was also rewarding since it wasn't a gimmee. We both had to work really hard for that flight. It was rough in places and some of the climbs weren't that great. There were lots of times when the glide out to a sandbar was suspect, and we would have had to rely on a sidehill landing in a nasty cutblock instead. Most times I was glad to be on my Magic 4 with it's better speed into-wind and glide; but there were times when it was full-on tiger-country flying and I wanted to be on Alex's glider! It was definitely a flight I'll remember!

Meanwhile many other people in Pemberton had excellent flying the same day. A bunch of people launched from Rainbow launch (in Whistler, Claude Fiset's launch) and flew to Pemberton, and one pilot possibly continued onwards to Lilloet. And a bunch of hang glider pilots showed up (Christine, Jon, Neil, and one other I can't remember) and I heard they had good flights too. Peter C. flew to Strawberry Point on Lilloet Lake where Ted has his boat-towing operation set up for the summer. I think today was a day where a person could have flown pretty much anywhere, the winds were so light aloft!