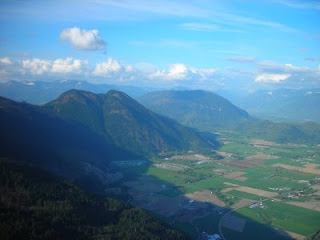 The forecast was a bit iffy for today...some models were calling for it to be OK, while others said it was going to OD. But given the next few day's looking like rain we decided to head out to Woodside.

Arrived at Woodside about 1pm to see some gliders heading out and with lots of height, so we went up. Initially it looked a bit light but it turned on shortly after Alex launched, and he was able to get to 1600m and cloudbase over launch very quickly. Back on launch I was getting ready and between his launch and mine, it went from light to quite strong cycles...my launch wasn't the prettiest and I'm sure it wasn't inspiring to the students still on launch, as they shortly drove down to head to Bridal and calmer conditions.

The air was very sporty and given that it went from light to strong so quickly, Alex and I were not sure about heading east to Bear Mountain for the crossing to Bridal (which was in shade, but people were staying up over there). So instead we headed for Harvest Market to try to connect to the clouds forming there.

The climbs at Harvest weren't that great, but I was able to pimp off Alex and decided to make the glide over to Cheam and the cloverleaf exit, in the hopes I would get there with enough height to climb out and fly to Bridal. Alex wasn't high enough and elected to land at the base of Green Hill where Jim et al picked him on their way to Bridal.

Meanwhile I had drifted with my thermal back up to 850m to the downwind side of the bridge and went for Cheam. I could see I would make the cloverleaf LZ no problem, but I wasn't sure I had enough height to actually climb out from there. Reached the cloverleaf at about 250m, which isn't much, especially with the mountain in shade and some wind about. So I landed at the cloverleaf; Kevin Ault came and picked me up as he was just coming up to Bridal from Chilliwack.

Meanwhile Martin H. on his ATOS was at Upper Launch and reporting being snowed on so he was headed back to Woodside. It was ODing over Bridal and people were landing all over the place (the LZ and cars looked like a BFAR weekend!) so I'm not sure I would have stayed up on the Bridal side even if I had gotten to the cloverleaf with more height. I think had I left Hopyard Hill with maybe 100m more, I would have arrived at the cloverleaf with enough height to get up. Something to remember for future attempts!

Kevin and I drove back to Woodside and back up to launch, where it was still strongist-looking but some milk had come in to shade the sky, which I thought would be a good thing for today. Once again I launched and it was not great launching conditions...I dropped an A riser during my pullup (wearing mitts so hard to feel that I had dropped one until the last second!) which resulted in a cobra launch and a rather exciting skid across the carpet until I could get off launch.

In the air it was windy and mostly ridge soaring, with the odd thermal mixed in. Norm, Alex, and Kevin were with me and we were having a great time. Eventually we decided to head to Harvest Market and land there; there were lots of catspaws on Harrison Bay and the peninsula didn't look very inviting for landing.

Over at Harvest Market we were able to play on Cemetary Hill for a while in the light ridge/thermal lift, and then nice smooth landings in the LZ. Rob S. had driven down Kevin's truck and picked us up.

Meanwhile over at Bridal the OD had dissipated and people over there had great flights to the Butterfly etc. It looked like it became quite nice later in the afternoon over there while Woodside was still a bit on the strong side. It's hard on these types of days to decide which place is going to be the better one...

Both flights were just over 1 hour each, and my flight to the cloverleaf was around 17 km. It's kind of fun to try the Bridal crossing in different ways, rather than doing the Bear-Ludwig run. Next time we may try heading upwind of the Fraser river when getting to Harvest, as the thermals there today felt like they were originating from the Chilliwack side and we were running into them once they crossed over. By catching them earlier we may be able to ride them higher and get the necessary height for the next part of the crossing to the cloverleaf (or to the golf course). And of course there's always Green Hill to try too, if there are cu's forming over it. With the river rising and the sandbars disappearing now, there are less LZ options when crossing to Bridal so you have to pick your destination over there a bit more carefully.