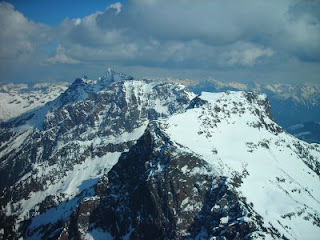 XC Skies was calling for a fantastic day at Bridal today so I got out there a bit early on the off-chance an early ride up was available. Got there just in time to miss the first ride up so Martin N. and I hung out in the LZ enjoying the sun and warm temps, until Kevin, Nicolai, and Monica showed up to give us a ride up.

Allan, Al T., and Rob S. were in the air already and it was obvious it was on. There were huge cu's all over the place and the lift was abundant. A sailplane was also over Bridal for a bit (Ihor?), which you don't usually see unless the lift is consistent.

I launched and found the air was a bit ratty with lots of holes amongst the lift. Cloudbase was high enough that I was thinking of going for altitude vs. XC distance, and when I heard Martin N. asking about the CYA's ceiling (8000') and that he was at 7500', I boogied over to Cheam to take advantage of the nice cloud that was hanging out over the peak. Way in the backcountry it was starting to OD and snow/rain on the peaks, but out over the Fraser Valley it was still OK, but worth keeping an eye on.

Beeping up to 2375m (7800')I was able to get over Cheam peak and take in the view behind (1st photo). I wasn't cold at all and the view was spectacular, and looki 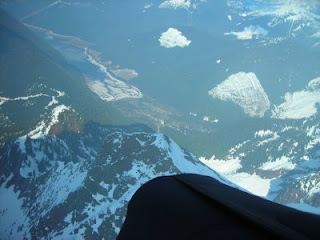 ng down at Cheam peak (2nd photo) is not something you get to do every day. I overflew the peak several times and then continued onwards to the Lakes, the Butterfly, and partway to Ludwig, when I decided to turn around since the wind was picking up.

The wind was indeed stronger and it took a long time to get back to Cheam. I left the Butterfly at 1500m, and got around the foot of Cheam below launch height. It was either that, or fly into the middle of the valley and deal with the valley wind and have to land early, so I opted for the rotor-route and kept ready for the active air.

Back at launch a new group of pilots were waiting for the cycles lay down as it was quite strong, and I bypassed them and headed to Upper launch. Overflew Upper and no top-landers yet (the snow is still virgin) so I did a few passes over the take-off. I got to within 10' or so but I didn't want to actually touch down...I had visions of myself sinking into the snow up to my thighs and being unable to relaunch, so I flew onwards to Elk.

Derek got high and was able to fly home to Agassiz, and Rob S. did top-land Upper launch after I opted not to. He reported that the snow is only ankle-deep on the front of the slope, after the initial sinking-in when top-landing further back. Over at Woodside it was apparently good early, and then a bunch of people landed to come over to Bridal as it was not as good lift over there, and all the cu's were actually over Sasquatch et al. and not Woodside itself.

Total airtime 3:15 or so, 40 km OR, and a perfect day. We had everything...lots of lift, lots of sink, wind, high cloudbase, smooth air later on, and no retrieves to deal with afterwards. It doesn't get much better than that!