Fraser Valley weekend of May 9-10 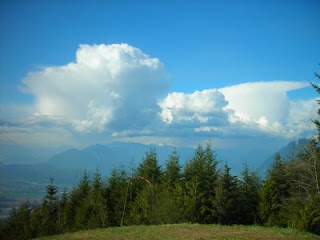 The original plan for Saturday was for me to drive Rob S. and Alex up to Horsefly as far as the road would allow, and then they would hike the remainder. The road up has been maintained to the split in the road, at which point the culverts have been removed, allowing streambeds to flow across the original cross ditches and make the road undriveable.

I dropped them off at the split in the road and drove back down, only to find that they had encountered a LOT of snow shortly after hiking and decided to turn back. So I returned to pick them back up and then headed to Woodside.

Over at Woodside the reports were of strong but punchy lift, and people not getting very high despite the vertical development that was going on (while on the road up Horsefly we noticed anvils in the backranges and getting that way in the Fraser Valley). The launch was full of both PGs and HGs (I think it's the largest concentration of HGs I've seen at Woodside in a long time). Martin was already in the air on his ATOS but not getting very high, which wasn't very encouraging from an XC point of view.

After launching I found the lift very disorganized and not very smooth; we weren't able to get much than 1000m which isn't really enough for a PG to head either over the back to Bear, or across to Sasquatch. After about 1 hour of frustrating flying (you could stay up indefinitely, but not go anywhere) I opted to land as it wasn't super-fun and the sky conditions were getting bigger.

Anvils were starting to form closer to the Fraser Valley and a large one was over between Cheam and the Butterfly. But to the west it still looked better so a bunch of us headed over to Bridal. I was a bit leery of the sky conditions and trying to convince myself that it was still OK to fly, but when we got up to launch and I got a look of what was over the north side of the valley (2 large anvils, one over Bear, and one over Sasquatch), I decided to step down, not fly, and drive Rob's truck down instead.

After enjoying the sun and warmth and and watching the 2 large anvils merge together into 1 ginormous super-anvil, with lightening shooting out of it, and heading towards Bridal, I heard on the radio that Rob and Alex and Norm (who were at Elk at the time) were going to land west of Elk. So I headed down to pick them up at Prest Road, and on the way back the sky had turned BLACK and it was quite still, like the calm before the storm. We were very glad not to be in the sky at this time as it looked very dubious. In the Fraser Valley, let's say 8-9 times out of 10 when conditions get like that it's still OK to fly, but there's always that 1-2 times in 10 when it will go nuclear with a gust front etc. I've learned over the years it's not worth the flight to tempt fate like that; there'll be lots of other days to fly!

Just as quickly as the skies turned black, it all dissipated to blue skies by 8pm. No gust front, although it went north in the Fraser Valley which is an unusual wind direction. We dodged a bullet this time.

The next morning Alex and I had a student ready for his first high flights off Woodside. 3 sled rides in perfect student conditions and then Ryan called it quits for the day and headed back to Vancouver for Mother's Day. The day had stayed mellow all day and milked up, but was soarable in the afternoon every time a blue hole came by. At Bridal it sounded better. And then later on in the afternoon it got quite breezy and probably ridge soarable at Woodside, and possible blown-out, although nobody was up there by then.

Nataliya, Kelly, and I took Unimog lessons with Colleen at Eagle Ranch to become "Mog-certified", and able to now drive that Beast down from launch if necessary. All in all a productive day, although I didn't do any flying on Sunday.