Bridal to Hope May 21

Arrived at Bridal around 3pm and got a ride up with Kevin Ault. People were already in the air and reporting light winds so we talked about a possible flight to Hope. (As Hope is usually windy in the afternoon, we don't usually fly to there, so a light wind day is a chance to do the flight.)

In the air it was a bit rough but not too bad. The best lift was at Cheam and the Lakes, where we got to 1900m and discovered it was still light winds even up that high. So when we got to the Butterfly Kevin and I started chatting about continuing onwards to Hope.

At this point we met up with Martin Henry on his ATOS, who had just crossed the valley from Bear Mountain, and was on his way to Elk for his return to Woodside. He was also reporting light winds on the north side of the valley, which reinforced our decision to try something new.

Alex was game for a run to Hope so we topped up at Ludwig (still light winds, rare for Ludwig) and dove over the back to Laidlaw. We made sure to stay in the back of Laidlaw and headed for the mountains back there, to stay out of any valley wind that might manifest the further east we went.

I got there first and was able to find a nice thermal right away, and Kevin soon joined me. Alex was a bit lower and took a bit longer to get up to us, and then Alex and I went on glide for the east end of Laidlaw while Kevin topped up a bit more.

On the next mountain we arrived a bit low and had to grovel on some low cutblocks while Kevin was more comfortably high. A bit of valley wind was beginning to show up low down, so Alex and I had to slowly work our way back up to the still-not-windy upper altitudes and Kevin before we could continue. 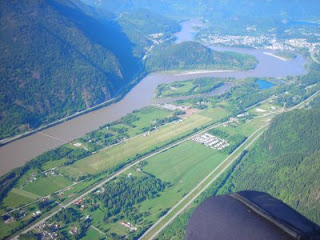 The next glide had some definite downwind to it, and we knew it was more important to stay high for this one. This last glide before the final push to Hope is a bit LZ-deficient and we didn't want to be having to land on the highway median or the railway bridge at Hunter Creek (where I landed a few years back, going backwards). Fortunately Mount Devoy faces west and we were able to ridge soar our way up and eventually thermal away from it, where we could see the Hope airport (first photo) and the safety of large fields once again.

Alex suggested we continue to Hope Mountain (second photo) which is just east of the airport since we were still really high (1300m or so) so we headed downwind past the airport, and arrived at Hope Mountain at about 1000m. It was windy enough to ridge soar up the face of Hope Mountain and find the odd thermal, as it was getting late (6pm) and things were beginning to mellow out. 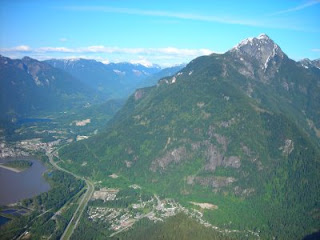 At this point Norm got on the radio (he was at work) so we decided to land in Hope rather than the airport (after about 45 minutes of ridge soaring Hope Mountain), for a change of scenery. Norm initially reported light winds in town so we headed for his school, but as we got lower we realized the winds were in fact much stronger (they had increased after Norm's report) so we changed our LZ to that of a larger school.

Alex was lowest and landed first, reporting strong winds and turbulence down low. Kevin was downwind of the LZ at this point and had to use speedbar to get back upwind; I had flown across the Fraser River to the bridge to the Fraser Canyon so was still upwind. We both landed after a bumpy and windy ride through the rotor of the small bump just upwind of Hope. Tracklog is here.

After a few phone calls to let people know where we were, Derek offered to come get us as he was just driving down from Bridal launch. Excellent retrieve and back at the car by 8pm, not bad for a 40km flight. Thanks for your help Derek!

I've flown to Hope several times, but never have flown Hope Mountain. Usually by the time I get to Hope I'm low and on final glide to the airport or wh 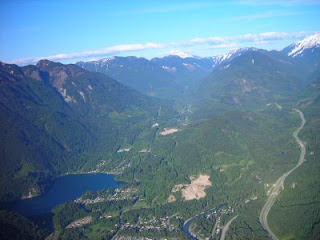 erever. So it was a real treat to arrive at Hope high enough to continue the flight and see into the Silver Valley and Mark Fraser's launch (Fraser's Guarantee) that we flew in the summer of 2006. It was also nice to look up the Fraser Canyon and the Coquihalla (third photo) from the vantage of a paraglider.

The flight wasn't easy...there were some hard moments and the lift wasn't always where you thought it was going to be. It was nice to fly with Kevin and Alex in a mini-gaggle and take turns leading out and finding the lift for the other 2. When you have to work at the flight a bit, it makes it that much sweeter!