Tom Gregg was heading out to help Al install the new outhouse on the lower launch so I tagged along, the day was looking good for a local flight!

The actual flying was quite nice and cloud base was around 1800m in spots, so after tanking up at Gregory I headed over to the Steelhead to cruise around over there.  There was some west wind coming through and I did get low (I thought I would have to land at the Durieu school) but I found a scrappy lee side thermal which got me back to cloud base and back to launch where Al's students were still doing laps.

Greg had launched and we flew north to MacKay lake and then the front side of the Davis lake bump (there was lots of lift around Davis bump!) before it was time to land and then get to work installing the outhouse.
Lots of black flies and we also discovered a nest of nighthawk fledglings as we were creating the trail to the outhouse.  But in the end we got it installed and it has a nice view of Davis and Stave Lake.  Many thanks to Al, Tom, and WCSC for the donation of the outhouse! 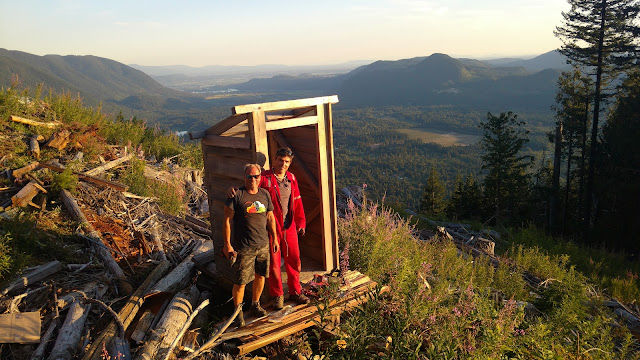