The final day of the US/Canadian Nationals!

I had noticed the day before that this was supposed to be a significant north wind day, and I had suggested to the comp organizers that they perhaps explore the option of moving the comp to Saddle Mountain for the day, since Saddle Mountain is a north-wind site and Chelan isn't.  However we ended up going to the Butte anyways...apparently the comp's liability insurance didn't cover Saddle Mountain (nor the north side of Chelan Butte since that's near the cell towers).

So anyhoo we were stuck at Chelan and it was blowing pretty significantly from the north, and we weren't allowed to launch near the towers.  So that left us with either trying to launch from Lakeside (NW) or wait for it some thermal activity to overcome things on the south side. 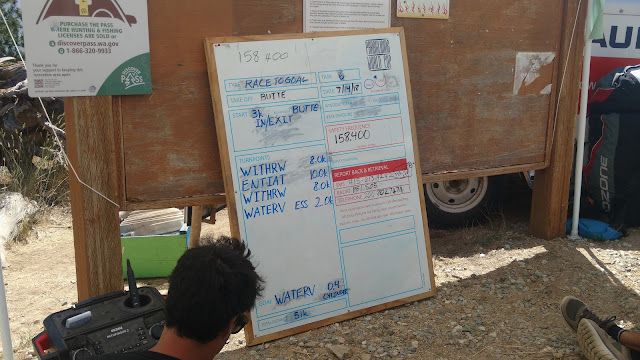 The task committee set a provisional task to Withrow-Entiat-Withrow-Waterville, pretty short at 51 km, and essentially zigzagging cross- and downwind.  So now we just had to wait for the north wind to abate...3pm and we were still on hold, so the organization decided to cancel the task, at which point a bunch of pilots launched from Lakeside.

It was stay-upable on the NW side and some pilots were able to get up high over the towers by flying to the north side and getting up over the Chelan Falls waterfall, but I don't think anyone got high enough to make the crossing to the flats to attempt the task.  I chose to get a ride down since my glider was already nicely packed from yesterday's landing at the soccer field, and I didn't really feel like landing at the junkyard or Lone Pine and packing up in sagebrush (yes I know it's not a particularly good reason!).

So the comp was officially over and the awards ceremony was later that same evening!  We ended up with 4 tasks which is pretty average for a Chelan comp, and this year we didn't have to worry about thunderstorms or fires.  However we didn't get to go far distance-wise which I think was a big reason why many international pilots showed up, after the last 2 comps where we've set the site/world record for a comp task.  I believe next year the organization is going to aim for a full-blown PWC which means it will potentially fill up quickly, so make sure to register early when the 2019 PWC season reg opens!

The 2018 Canadian Paragliding Championship winners are:

If you are looking for the US-specific or overall results you can find them here!