After yesterday's rest day (too windy for a safe task, although some free flyers went 250 km!), everyone was ready to go today.  I thought we'd have some form of triangle or out and return, but with the north wind the task committee decided to go long downwind and fly to Saddle Mountain via Ephrata.

The north wind was making it difficult to choose a launch, but I was confident I could stay up so I launched quite early in the queue.  It was actually quite easy to get up, and I was glad to have launched early as I saw the hoopla on the 3 main launches as comp gliders were trying launch and failing in the light and switchy conditions.

The start today was an hour later than on other days, which allowed us to get higher than usual and cross over the flats for the remote start over there.  It was so nice to get over the flats nice and high and not scratch next to the high-tension power lines like we so often do :) 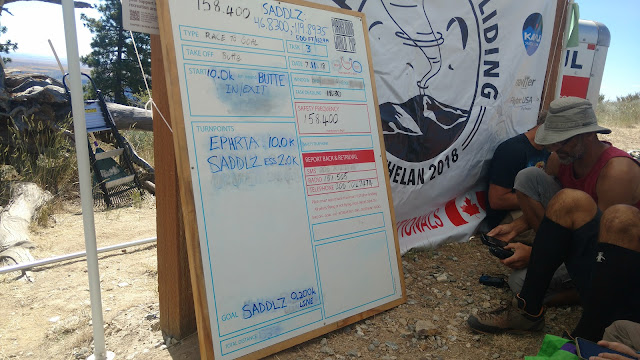 The north wind was quite significant so our gaggle was drifting too far out of the start cylinder so we had to keep an eye out to not get too far downwind too early.  But I was in an excellent position when the 2pm start happened and we were off!

The climbs were strong and plentiful on the flats all the way to the canyon and Palisades and Appledale, and on the other side it was also fast and furious all the way to where the plateau drops off to Ephrata.  And then it was a different animal!

After tagging the Ephrata turn point we tanked up as high as we could since we were now transitioning from the strong, brown, and dusty plateau, to a lower, green, and much wetter valley, and I anticipated we would very shortly be slowing down and racing less.

I could see the gaggle ahead of me on a giant glide over the greenery and as I continued to watch them I could see they were getting not much, and the wind had switched from a north tailwind to a south headwind, yay!  Our gaggle spread out and went on a similar glide towards Saddle Mountain, which was about 40km away still, but we were getting nothing either, and pretty much everyone lawn-darted into the ground around the town of George, about 25-30km short.

I was surprised that nobody was able to climb out of there out of our 2 gaggles, usually there is at least one lucky person who finds something and continues on, but this was one of those rare times when the entire gaggle goes down in the same area.  The lead gaggle had managed to somehow squeak through the Green Valley of Final Glide and around 10 made it to the Saddle LZ and goal.

It was a fun task despite not making goal and cool to fly over the plateau and drop down to the Ephrata valley, but I think it would be a good idea to have that task on a day with some more clouds north of Saddle Mountain, so we'd know that the green valley was actually working.  Also, had the wind stayed north once we were south of Ephrata (and not south like it turned out) I think we could have made it, as that would have made a huge difference in our glide ratios and we would have covered the green valley much quicker and made it to the brown hills nearer to Saddle Mountain.

We did have a reserve toss today near the Ephrata turn point but the pilot was totally fine and in fact was messaging and WhatsApping other pilots on his reserve ride down, so he must have chucked high!