Wow such a different day than yesterday!  If you were watching XC Find you would have noticed a whole lot of gliders landing at the first turn point...the task committee didn't want us attempting the crossing of the Rim too early, so they put a turn point at Forest Mountain, to the west of the Butte, and this ended up flushing a good percentage of the field! 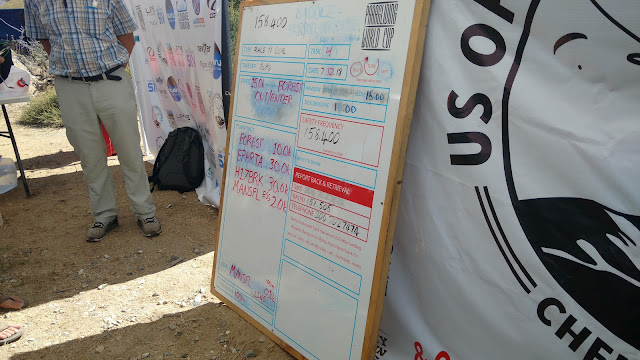 It was a bit stable-feeling in the air over the Butte and I watched some free flyers head over towards the first turn point and get nothing and barely make it back, which didn't bode well for us.  And in fact when the start happened, I was too low to even attempt going over there (although a bunch of pilots went anyways, super-low, which I thought was a bad idea), so I decided to ignore the start and keep climbing before making the trek.  A group of like-minded pilots stayed with me and we all climbed to 2500m, well above our previous climbs where we had been getting to 2200m or so, and then we started the slow into-wind glide to the entry start and turn point.

The actual turn point edge of the cylinder was on the OTHER side of the highway 97 canyon into Chelan, and I saw many of the earlier pilots scratching low on the ridges, landing out partway down the mountain, landing out on the golf course, and landing out on Lakeside.  It didn't look good.  I guess I could have turned back and tried to get more altitude at the Butte, more than 2500m, and try this again, but I also didn't want to get too far behind and then have zero pilots to fly with.  The lead gaggle had managed to make it across the canyon to the other side and were at the turn point and turning in what looked like very weak lift, but were too low to make the crossing back without landing out, so I actually hadn't lost anything by waiting the extra 25 minutes before even starting the task.

The lead gaggle passed underneath me as I reached the turn point and then it was time to find lift, any kind of lift, as the wind was venturi-ing through the canyon and blowing apart all the thermals.  Pilots were falling out of the sky as I joined them in one of the several fields in the canyon, where it was actually not too bad for landing conditions so long as you were smart about keeping your glider in control as you came down between the canyon walls.

There must have been around 30 pilots who landed in the canyon while another 10 or so side-hill landed on the nearby hills and had to hike up/down to get to a road, or landed next to the lake or the golf course.  While I was bummed to have landed so early, I was also glad to have had a safe uneventful landing, and I felt better after hearing that some of the top names at this comp had landed out in the very same field only moments before.
Oh well, an early finish to my day which meant I actually had time to go swimming and catch up on some other things!

Meanwhile those who managed to make it back from the Forest turn point were back at the Butte and crossing to the Rim to fly the rest of the task which was a giant triangle-shape to the edge of Banks Lake and then to Sims corner, before landing in goal at Mansfield.  It looked like if you could have survived the Forest turn point, you were pretty much assured of making goal!  When I last checked, there were lots of pilots in goal, so they will be very happy ;). Me, due to the scoring using FTV, this will be my discard day :)

Tomorrow looks blown-out and Saturday is looking iffy as well at this point, but sometimes forecasts change so we will see what happens tomorrow!