Another long task, this time because of the strong south wind we were heading north to Oroville and the US/Canadian border, about 133 km away!

Launch conditions were a bit better today with a definite east flow on the Butte so pilots were launching off Ants in a speedy fashion (unlike yesterday where it was quite switchy on launch and lots of aborts).  But it was tough to get high over the Butte…with the strong SE wind we were getting blown back over the lake and we weren’t getting more than 2000m.  But happily, about 15 minutes before the start, we all found a climb which took us to 2200m and then it was off north to the first control turn point of 15 km around Bridgeport. 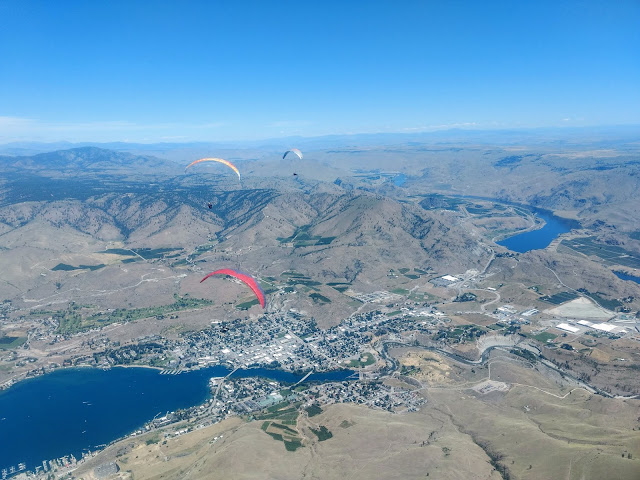 The turn point radius was actually on the other side of the Columbia river so we had to cross the river twice, and once back on the “proper” side, it wasn’t the easiest going in the hills behind Pateros.  I saw a lot of pilots landing in this stretch, so I got as high as I could (2400m) and then dove deeper into the mountains where the clouds were beckoning and cloud base was around 3600m.  Despite being deep there were actually lots of roads and farms with large fields to land in, but given the wind strength I had a lot of incentive to stay high and avoid all that hoopla ;)

A bunch of us did the same thing, staying deep and high, which was a good thing since we were seeing groundspeeds of 80+ kph (one pilot reported 100+ km on bar!).  I did get very low one time on a low-angle hill with few landing options, and single digits of groundspeed, but I was able to dig myself out of there with Brett Yeates and then we were off again. 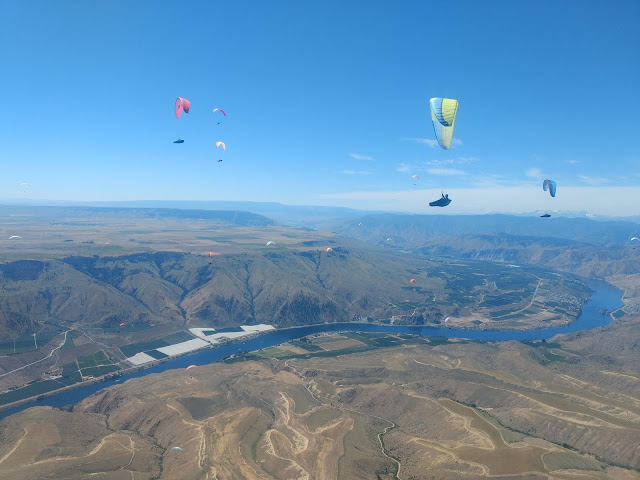 The conditions seemed to be getting better and better around Tonasket, with more and more generalized lift the closer we got to Oroville.  It was no longer necessary to actually thermal, but flying straight we were flying through oodles of light lift.  The predicted front was moving in from the west and was creating lots of clouds and lift but also lots of wind up high.  I could finally see Oroville, the lake, the Canadian border, and Osoyoos, I was 30 km away from goal at 2800m, so I decided to go for it.  I had a wicket tailwind as I came over the last ridge south of Oroville and then it was time to find the goal field.

The pilots who were ahead of me were reporting the goal field was a bit small with obstructions (powerlines and trees surrounding it), and given it was blowing 25+ kph at times, most pilots were opting to land either at the nearby running track or the baseball diamonds after tagging the actual goal field.  So it was a good thing I arrived high enough to tag the goal line, and then continue north another 1km or so to the baseball diamonds where it was plenty large enough to back myself into for a safe landing.

Between the actual goal field, the running track, and the baseball diamonds, I’d guess there were about 50 pilots in goal.

Back in Chelan it was still blowing strong and pilots were ridge soaring the Airport Ridge.  Tomorrow it’s supposed to swing to strong NW, so if we fly, I expect we’ll go out onto the flats and perhaps go long!