Tried something a bit more ambitious today after 2 days of easy flying.  A bit drier than the past 2 days but the thermals were still quite nice and not rough, and the only clouds that got really big were waaay in the distance.  Had a tense moment over launch when a glider had a collapse and turned right into me as he worked on fixing it...fortunately I was able to crank out of his way as he pendulummed through where I had just been and continued on his way.  Gotta have eyes everywhere in a Valle crowd!

This time a group of us decided to try La Pila (out by the mine on the flats) followed by a run to the ridge behind Saucos and then back to the Lake.  But in the end it was just Brett Z and I doing the flight as everyone else either changed their minds or didn't catch up in time...meanwhile a bunch of other pilots had planned on Aguila after La Pila before the Butterflies and then Valle, so we were all together up to La Pila at least.

After tagging La Pila, it got a bit slow as a bunch of high cirrus came in and shut things down, so it was a bit of survival mode at 3 Kings until it turned on again.  Hopefully the Aguila-bound pilots were able to survive the shade cycle too, and not get stuck landed out on the remote back ridge with a long retrieve.  But once it turned back on it was an easy run to Serro Gordo to hook up with the convergence, which today seemed to be centered over Escalaria/Mesa-D area. 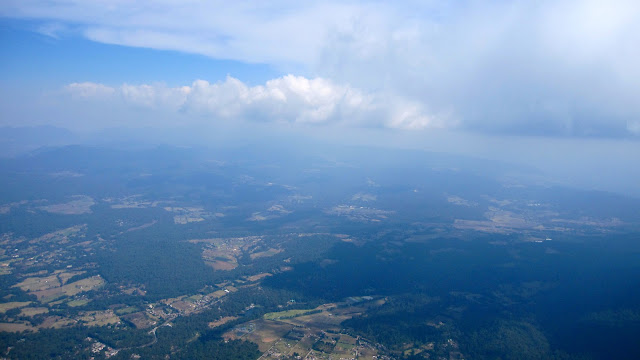 A giant blue hole the direct way to Saucos and the ridge so Brett and I flew the Mesa-D route instead, flying the cloudstreet without much turning needed.  Plenty of lift over at the actual ridge, and it looked possible to actually head up to the Butterflies, but I wanted to start heading back while it was still strong and in the middle of the day.

The convergence was still set up in the same place, and the big blue hole over and to the north of Jovans was still there, so it was back towards St. Augustine and Escalaria before heading for home.  A bunch of pilots were coming at us by this time, perhaps the Aguila-bound crowd, and the cloudstreet was looking sweet for everyone.

Something to confess...I had forgotten my "in-flight preparations" at the Posada and I was really needing to go for the past hour, and I finally broke down and decided to cut my flight short for some sweet relief on the ground.  Brett watched me turn around and spiral down to the airport, and I'm sure he was wondering what the heck I was doing, but he continued on and was able to make it back to Valle.

I wasn't really that upset as I was only about 6-7km from the lake and had the airport strip all to myself and a quiet place to pack up...the airport security guard came out to chat later on but it was all good and no issues landing there.  30 minutes later back in Valle courtesy of one of the Norwegian shuttles picking me up on the main road, doesn't get much better than that!

I think the La Pila-Aguila-Butterflies group probably made it, although I'm sure there were some pilots that got dropped during the run back to the Lake, as the blue hole the direct way  back was there all afternoon, and if you were too low under the convergence, you ended up just in the shade and no way back up to cloudbase.  The convergence works awesomely, so long as you remain the zone just below cloudsuck but not so low that you can't use the cloudsuck at times.  It's a fine line!