Another perfect sunny day with delicious cu's popping all over the place!  Short-ish task today to ensure lots in goal, this time 57km over to La Pila, Aguila, and then the lake.

Lots of cloud surfing was had by all just before the start, and fast racing to La Pila and Aguila where the clouds were showing the way.  I had my fastest, smoothest climb of the day just south of Diente, where a nice 5+m/s took me up to cloudbase and then it was basically speedbar all the way past Espina and Maguey where a few more turns just to ensure goal, and then reaching the ESS in 1:56. 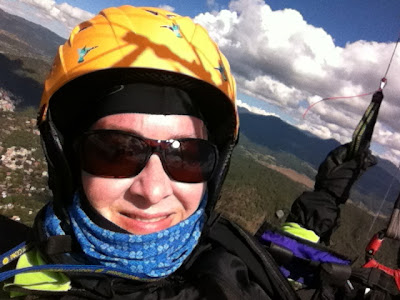 We did have at least 1 reserve deployment (and possibly 2)...the known one was tossed really high over La Pila and he apparently rode it down into a canyon where he was eventually found.  I also saw a pilot, low, on the Avandaro side of the lake in some rotor, and later on didn't see him...he reported settling into the trees as he couldn't make the glide to a beach just upwind of him.  I did see 2 reserves being examined in the goal field and one was pretty trashed!

We had a pretty full compliment of Canucks in goal...Brett H, Brett Y, Will, and myself.  And it was Will's first time in goal!

The task committee could have certainly called a longer task today, but given the paucity of pilots in goal the past 2 days, I can totally understand them wanting to have lots of pilots in goal.  In the end I saw maybe 50-60 pilots in goal, with several more either landing short, or landing in goal after it closed at 4:30pm.  Had it been a free flying day, it would have been an easy flight to Toluca!