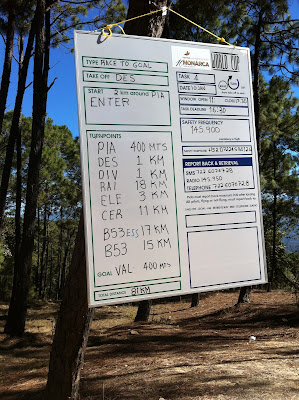 Felt a bit high-pressury today, with much less clouds and rougher climbs.  In fact the whole waiting for the start, and until the convergence, was rough and ratty compared to yesterday.

Given the bluer skies and higher base (3600m) the task committee sent us to the Monarca ridge and then behind Torre launch to the Elefante TP, before returning us to the backside of the Mesa and finally the lake, for about 80km.

It was only once we arrived at St. Augustine that I was finally able to connect with the clouds and get high enough to stop worrying about landing out :)  Because the Monarca TP was arranged as a line, we could tag it anywhere along the ridge, so I opted to head there via Mesa-D, with a bunch of other gliders tagging along behind me.  The lead gaggle had chosen the more direct line to the Saucos end of the ridge, but it seemed much bluer going that way which is why I chose the slightly-longer, but (looked) more centered under the convergence, route.

I've never really liked the Elefante TP...I've always found it windy, rough, not much for cloud action, and generally not that nice a place to hang out.  Today was no exception and it was slow going in there to stay high in the wind and not land out, while trying to tag the TP way out in the valley.  Many pilots landed out in the Saucos area as the wind was too much for them, but about 4 of us managed to get out of there and back towards Jovans.

Unfortunately we weren't able to reach the convergence and it was a windy ride to the ground around the Jovan area.  I pointed my glider at the last TP and turned around 3 km short so I could make a safe landing at the airport where I could see Brett Z and James Bradley packing up.  The small airplane waiting at the end of the runway was nice enough to wait for me to land before beginning his takeoff.

We had at least 3 reserve deployments today...one was just behind launch a few minutes after I took off.  The second was just short of the Elefante TP.  And the third was in the 3 Kings area, where a helicopter was dispatched to expedite the removal of the pilot+glider from the trees.  All pilots were OK.  Brett Yeates managed to put his glider down in a tiny LZ after a long sinky glide over a sea of trees and a long walk out to Serro Gordo.

In the end only 8 pilots made goal so me landing at the airport actually gave me a pretty good score...I managed to hold onto 13 place for the day.  Pretty happy with today's result!