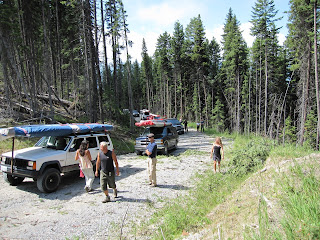 I wasn't too inspired by today's conditions, since they looked very similar to yesterday's, when we weren't really able to get high and go XC. But I decided to go up anyways to see what would happen. After yesterday's windstorm there were lots of trees down on the road up to launch, so we brought a chainsaw and Glenn Bitterman took care of the trees that we encountered. In the end it was convoy of trucks headed up as we all got backed up at the last tree which took a while to remove (photo 1).

Up on launch it still wasn't very inspiring, but I launched anyways (if I sunk out, so be it) and flew to the Pagliaro side of Mt. 7 to see what would happen. After the usual grovelfest at the toe of Mt. 7, I finally got a nice climb to 2500m and decided that was as good as it was gonna get, so I went for the Pagliaro crossing.

Downwind which was nice, but at the cliffs there was nothing, so I continued around the corner and it was the same thing. The first 2 spines behind the back of Pagliaro never work for me, while the 3rd one usually does, so I booted it to the 3rd one, skipping past some people who were sticking with the 1st and 2nd spines, and got another climb which got me within range of some convenient LZ's.

A tandem was in the area and we teamed up for the next 20 km or so, taking turns pushing out to look for lift, and then hop-skipping downrange at less than 2000m. The whole time we had a LZ within glide but there wasn't much space for scratching in the same spot and possibly getting even lower. So as soon as we got low (1800m or so), we'd leave and continue downrange looking for something nicer.

The tandem and I parted ways as he turned around at Parson while I continued downrange. The rest of the field was behind me and scratching like mad on Mt. 7 and Pagliaro, and reporting the same conditions I had encountered earlier. The lift wasn't that good anywhere until around Harrogate so I just kept moving in the hopes that something better would come up.

I continued in this fashion until Harrogate when a bunch of cloud shaded the sun, and I had to hang out at the forest fire ridge for about 10 minutes, ridge soaring in the NW winds, until the sun reappeared to light my way south. That must have triggered something, as I got my best climb of the day so far as I was headed out land, and beamed (relatively speaking) back to 2600m and was back in the game (photo 2). 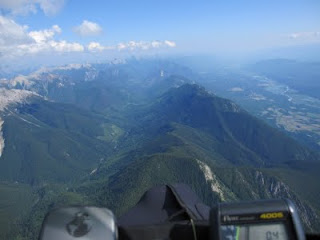 With such low heights I was gonna take the front range for sure and I was just happy I was gonna make Brisco at this point. I didn't really aspire to anything further south until I noticed the clouds were getting closer (I was getting higher) and the lift was actually getting easier to find. With the range a bit narrower there it was easy to ridge soar my way up the NW sides of the ridges, fly downrange, and repeat at the next NW ridge I came to. I started to get excited about possibly making Spur Valley, or even (gasp!) Radium.

I came to the dreaded Spur Valley gap and decided I was gonna commit to the crossing and hope to ridge soar my way up the NW side of the Edgewater cliffs range, or else have to land on a logging road and do a bit of hiking out. The gamble paid off and I was off to the races on the Edgewater cliffs with Radium in sight. Edgewater to Radium was pretty easy as I was at peak height or just below now (2200m). 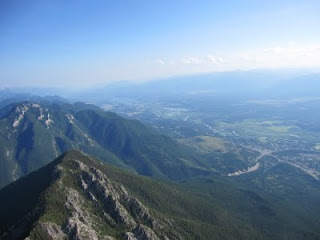 At Radium I was still high and could see Invermere (photo 3). Could I make it? The NW wind had died at Radium, to be replaced by a SW wind (lake breeze from Lake Windermere), and I was now bucking a headwind. And it was getting late in the day, about 7pm, and the thermals were dying. I decided to go for it and slowly pushed my way upwind towards Mt. Swansea and the 100km mark. As I watched the GPS pass 100km I did a little yippee and wondered just how much farther I could go. It was starting to glass off and there was light lift everywhere, but the headwind was making forward progress slow.

I made my way to 106km and then looked for a place to land. Saw a nice empty lot in the subdivision south of the airport, and came in for a nice landing across the road from some people BBQ'ing on their back porch. One of the ladies came over and introduced herself as a friend of Max and Penny's, and offered me a ride to Spur Valley. Yay! After a quick stop at the airport to say hi, we hit the road hoping to meet up with Robin who had landed just past the Spur Valley golf course.

Of course he had gotten a ride by then, but I found another ride in the form of a couple from France, visiting Canada, who were actually from Annecy and knew what the PG bag on the side of the road meant! They were on their way to Kelowna so gave me a ride all the way back to Nicholson which saved me from having to get somebody from the LZ to come get me, as it was party time and they were all drinking already anyways :)

Back at the LZ to find Karen and Doug's 30th wedding anniversary in full swing, and got there in time for the champagne and the leftover bratwurst from earlier in the evening, courtesy of Vincene Muller.

Other notable flights were Robin (77.7km), Louise (Harrogate), and an unknown PG I saw landing at Spillimacheen as I was getting my ride back (the car was full at this point so we didn't have room for you, sorry!). The day was really light and scratchy, and I think this was my hardest Invermere flight yet. It took 5 hours to get the 112km (106km straight line from launch), and most of it was spent below peak height and always thinking of having to land. But very satisfying to accomplish the mission on such a shitty conditions day!