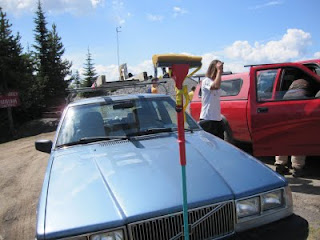 Today was looking like a good day so the plan was to go downrange as far as possible. But there was a lot of cloud around (it took me a while to get high, and in fact I had to fly to the Pagliaro cliffs and hang out there for a bit before Keith showed me the way) which was going to make this difficult.

Downrange we were able to fly about 35-40 km, just past Parson, and from then onwards it was a solid wall of overcast and no sun anywhere. No big cu-nims...just too much cloud to realisticly continue onwards. Robin, Al, and Fedja got really high at 35 km and decided to go for it, while I decided to turn back and try for an out and return. (I had watched a couple of gliders venture into the shade and eventually land due to no lift so I wasn't optimistic about their chances).

Turning around it was much nicer to the north so I flew back to launch, getting low only once at Pagliaro, and then topped up to 12,000' over Mt. 7. To the north was very yummy so I continued north into the headwind to Moberly. I had a cloudstreet the whole way there so I was able to stay high for the crossing over the Trans-Canada highway and skip over Sugarloaf.

At Moberly I wanted to venture into the Blaeberry valley but it was nuking NE winds there (and the whole time downrange the prevaling winds were NE). At one point my GPS said. 0.0 kph groundspeed, and when I turned around it went briefly to 93.6 kph (although I think that was partially due to the steep banked turn I was in at the time). But my downwind speed out of there was 75+ kph so I knew there was no going into the Blaeberry today. Too bad...I've always wanted to fly up to the glacier there.

Back towards Mt. 7 and a nice tailwind into the LZ. Robin, Al, and Norm were already there from their open distance flights ~45-55 km downrange (Harrogate to Brisco area). Al had a bit of an epic as he had a collapse in rotor between Kapristo and Willi's knob, right up against the cliffs, and had to stall it out next to the rock faces. Fedja managed to get 70 km OD in, landing just short of Spur Valley, flying in the shade. Rob Clarkson flew to Invermere and made it as far back as Spillimacheen, for about a 140 km flight. Andrew and Evelyn did their first XC flights, landing in Parson for about 25 km. Raul landed out and met a bear on his hike out, prompting a cell phone call to 911. He hiked out OK but forgot to cancel the helicopter which was dispatched. A bit of confusion until SAR was notified that he was indeed OK and to send the troops home.

My total distance today was 91 km out and return, 4+ hours airtime. Even when you can't go far downrange, Golden rocks!