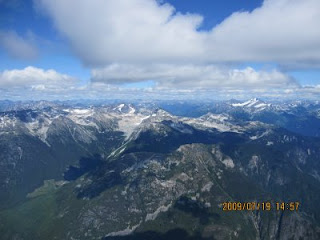 I wanted to get another flight in Pemberton under my belt before heading to Golden, and XC Skies was calling for a good day up there (light NW winds, 10,000’ base). Got to the Community Center LZ about 12noon and Corinne was launching students and said it was nice. About then 4 hang glider pilots showed up…Jon, Jeff, Alex, and Ralph. I got a ride up with them and discussed our XC plans for the day. With the light winds I was thinking of a flight to Lilloet, or perhaps to Goldbridge, something different from the usual Hurley-and-return milk run.

Up on launch it was nice cycles with a touch of north (which is nice) but the windsock down on the Dome (they just installed it a couple of weeks ago), said it was east out front. Hmmm, leeside? Anyways, I thought it still looked good so after watching the cycles for a while I launched just after 2pm.

Right off launch I got a nice thermal, and didn’t even have to go over the south rocks where you usually get up. This thermal took me to about 3500’ in a fairly strong west wind, when it all of a sudden switched to east wind. At the boundary it was a bit rough, but totally manageable, and I continued upwards in the east wind until about 6000’, when it switched back to strong west wind.

Now I should mention that during part of this thermalling upwards, the sunscreen that I had applied earlier started to run into my eyes, blinding me, and for about 10 minutes I was pretty busy blinking away tears and trying to wipe the darn stuff out of my eyes. Denis on launch was trying to radio me to find out how it was, and I was too busy with my blindness issue to answer. Apparently this told him it was very rough up there and not really nice, so he decided not to launch, and in fact all the other people on launch who had arrived after I launched stood down as well (except for the HG pilots). It was a bit rough in places, but I was making it look really bad by flying erratically (sorry Denis!). I eventually regained my vision and started thermalling properly again, and radioed that it was actually OK, but everyone had driven down by then so I was the only PG in the sky. 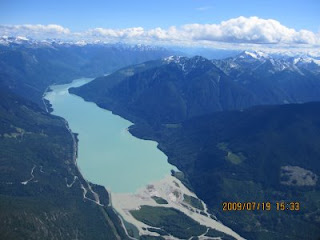 I got to 10,000’ over the tower and decided to jump over the back to Cassiope Peak (photo 1), at the head of the valley towards D’arcy. I flew along the range there to the north end of Lilloet Lake and the head of the Duffy Lake road mountain pass. I thought briefly of heading over the Duffy Lake pass to Lilloet, but cloudbase wasn’t quite high enough for my liking (I’d prefer 11-12,000’ at least since there are few landing options for most of the way to Lilloet). So I decided to cross to the other side of Lilloet lake (photo 2) and return via Mt. Curry.

The crossing was uneventful but I arrived a 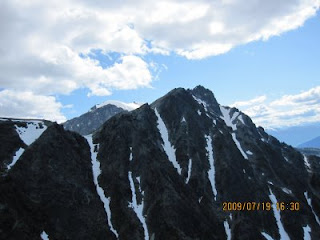 bit low, but had the glide out to a couple of fields. So I scunged around until I found a nice climb and then started making my way west towards Mt. Curry. I discovered that the wind was actually very north here, which meant the entire face of Curry was ridge soarable! It was the smoothest air I’d encountered the entire day so far, and I took full advantage of this opportunity to fly right along the rocky spines in the smooth up-ness (photo 3).

Ridge soared my way past the airport at about 9000’ and then found a thermal on the sunward side of Curry, which took me to 10,500’. I was above the peak of Curry and could see into the back ranges, and Whistler was only about 2 glides away (photos 4 and 5). But it was actually south wind behind Curry (north wind on the Pemberton side), and converging right at the Peak, so I played around there for a bit. 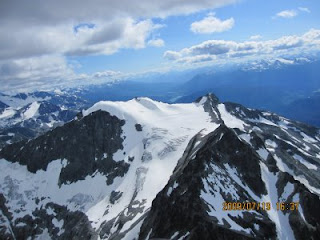 Next on the agenda was the crossing to Satellite Peak, which I had a nice tailwind for initially, and then hit the west wind once over Pemberton proper. Cu’s forming over the valley so I joined up with one of them and used it to return to launch at about 8000’. At this point I saw a couple of HG’s, which I thought would have followed me on my circle of the valley, but apparently once they launched they couldn’t find me to follow.

Now that I was back on familiar ground and it was only 5:30pm, I decided to tack on a Hurley run to round out the day. Did the run out to Hurley in the mello 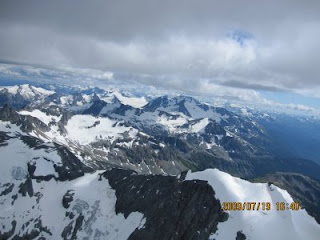 wing conditions with Ralph and Jeff and a sailplane, and was back to launch by 7:10pm.

As the HG’s were ahead of me on the way back I didn’t see them head to the airport to land there until the last minute. I decided to land there too, to be sociable etc., but as I flew over Pemberton I hit the Whistler Express, which put a stop to that idea! (Had I been higher I would’ve been above it and not a problem, but I hadn’t planned on an airport landing until the last minute so I hadn’t topped up my altitude at launch.) So I turned around and landed at the Community Center in fairly bumpy conditions. Total airtime 5:16, distance covered 77 km OR, or 63 km FAI triangle (depending on how I want to score it), max altitude 10,500’. A great day in Pemberton!

Posted by Nicole McLearn at 9:28 PM