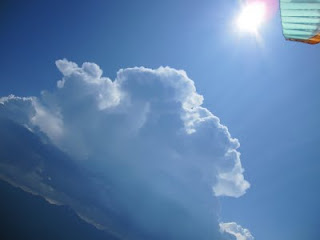 Yesterday was a write-off as far as flying went. The skies went nuclear before noon and a severe T-storm watch was in effect all afternoon. It finally blew up around 3pm with lightening and rain. People went to Cedar Lake, Banff, Invermere, Radium Hot Springs, etc.

Today the weather was looking better but still very unstable, so it wasn't looking like a great idea to do long XC. A bunch of us went up to fly locally, as there were giant cu-nims to the west, east, and south of us. North was the only clear air (and looked fabulous) but that wasn't really an option since it was rather strong NE winds aloft. The forecast was actually for light NE winds so I think the strength of the wind aloft was partially because of the huge cell to the SW of us, sucking all that air into it to grow.

Anyways, it was light SW down low, and then switched to NE at around 7000'. At the interface it was very rough. Robin, Fedja, and I were soaring up the NE side (backside) of Mt. 7 and getting to 9000'+. But we could see all around it was going off in a big way so we decided not to go anywhere and land at Nicholson. My flight was around 1.5 hours or so.

Fedja and I landed at Nicholson and Robin landed near the CP railyard in town. The huge cu-nim across the valley slowly moved south but we could see a bunch more lined up behind it. It finally OD'd and started to rain and thunder around 7pm local time. In Golden it was blowing 40 kph from the NE, but once south of the gravel pit it was actually south about 20 kph. I think the NE winds were venturi-ing through the gap between Mt. 7 and Table Mountain (where the Trans-Canada goes) but not able to bend around to head down the valley towards Nicholson.

Meanwhile Rob Clarkson flew downrange and ended up in Canal Flats (~150 km). Ken Nicholson landed near Brisco (~50 km) and reported landing 5 minutes before the wind switched 180 degrees. Guy landed in the river 8 km south of Nicholson (flying his HG) but is OK. Igor made it to Invermere (100 km). Norm, Keith, and Ryan opted not to fly.