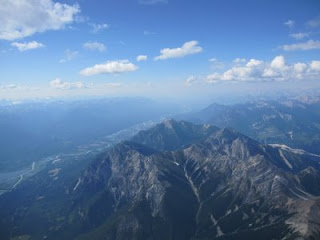 The first day of the Willi and it was a hot sunny day. After getting the preliminaries out of the way we went up to launch arriving around 1pm.

I launched off the south launch and immediately went up, and made my way over to the south ridge where everyone else had been getting up. There was one PG in front of me but I caught up to him quickly and I was on the way south towards Harrogate. Al was right behind me and we traveled together for the most part. With the east wind up high I was actually flying the east side of the range, staying between 11-12,000' or so, while Al was staying a bit lower and on the west side of the range.

At Parson I could see a bit of OD down towards Invermere and it looked like it was gonna be in our way soon. I radioed to Al that I was gonna turn around at Harrogate. The cu-nim was slowing getting bigger down by Invermere and coming north, so we turned around at the 43 km mark (the forest fire hill from a few years ago) and started running away from it.

There were a bunch of people chasing us but they weren't able to penetrate as far as we did as the cell was moving north and cutting off their route. Meanwhile Al and I were returning to Mt. 7 (it only took about 1 hour, vs. the 2 to get to Harrogate against the wind) and cloudbase was getting higher and higher. I got to 14,700' at one point, and cloudbase was still about 300' above me! Thin air up there and I had to make myself take deep breaths as I could feel myself getting a bit hypoxic and wanting to hyperventilate.

Once over Mt. 7 I flew back over launch just to close out my out and return and then decided to head to the LZ likkidy-split as the cell was now at Harrogate and still coming north. From 13,000' it took a while doing spirals etc, but I managed to land in about 30 minutes. As I got closer to the ground I could see a gust front coming up the valley...the water on the ponds was all smooth and glassy around Nicholson, indicating calm winds (which Bev confirmed at the time), but further south I could see the water was getting ripply and looking different.

Then I landed in calm winds and about 10 minutes later Randy Parkin got a call from somebody in Parson that a gust front had gone through at about 50 kph. Since Parson is only 30 km south, this meant the gust front would be here in about 30 minutes, give or take. I got on the radio and told the pilots still in the air to get on the ground quick as a gust front was coming up from the south.

Several pilots in the swamp to the north of the LZ; Fedja managed to stay dry even though he landed back there. He did an amazing job keeping his glider open. Other people weren't so lucky...a pilot broke his tailbone trying to land in the soccer field in Golden. 2 HG pilots (Serge and Doug Keller) broke parts of their HG's after hard landings (Doug came down like the hand of God smacked him down like a pancake; amazingly he walked away). A couple of pilots managed to land at the Golden airport with it's nice long strip that they could back into, backwards. A few pilots still in the air outran the gust front (Brett Yeates) by flying into the Blaeberry valley (off the main valley) and having uneventful landings there.

My tracklog is here.

Weather for today looks similar to yesterday. Chance of storms and gust fronts near the storms. We'll see who flies and who doesn't...I imagine a lot of people are now spooked.