Initially the weather for Saturday wasn't looking so hot; too windy from the north. But the forecast changed to south locally (good) and lighter (also good). So Jonas Buchli picked us up for the ride to the Andy Jackson Airpark and Marshall in San Bernardino.

Arrived in the LZ and then up to launch with Arnie (local pilot), where it was definitely on and strong on launch at 4000'. Apparently Marshall is usually a blue thermal site, usually not any clouds, but today there were plenty of clouds and a pretty high cloudb 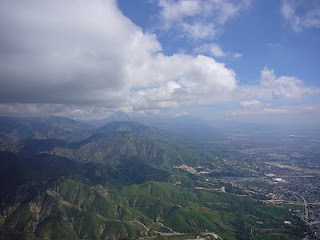 Launched and easy to get up, and once the 4 of us were established we decided to head south towards the dam and Mt. Gregornio (the highest point in SoCal, currently with snow on the peak), about 17 km away. Initially cloudbase was about 4500', but the further south we flew, and the further back we got, the higher cloudbase got. To get to the dam there are several canyons to cross (with big freeways going through them), and lots of spines to fly over (similar to all the spines in the Owen's Valley). Fortunately there was plenty of lift and lots of clouds to fly in order to get over these canyons with little drama.

Part-way along Alex got low and didn't connect with a necessary climb, and rather than land out and face a multiple hour hike back to the LZ, he opted to side-hill land one of the spines (X-Alps style), hike up to a higher spot, and relaunch. Meanwhile the rest of us had continued to the last peak before you get to Mt. Gregornio, and pretty much the place you have to turn around at if you want to make it back (it's committing continue to Mt. Gregornio, and unlikely for PG pilots to make it back as it's set far back with low-angle spines at the foothills). I got my highest of the day at the turn-around spot and got to 6300'.

I hadn't really planned on doing a big XC, and hadn't done my usual diaperizing. At this point I was really feeling the need to go, and it was starting to overpower my desire to make it back to the LZ. So I bit the bullet and headed out to land tout-suite. 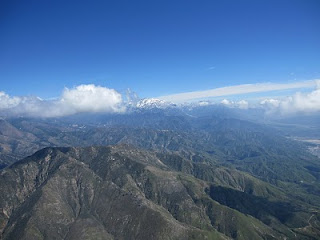 After packing up near the water treatment plant I had landed next to, I looked for a way out. Most of the area was was gated and fenced with coiled barbed wire, but I found a way out via a nearby backyard, after asking the owner if it was OK for me to scale his fence.

Met up with Arnie who had landed about a mile away, and then Jonas came to get us. He had made it back to the LZ, and Alex (who had relaunched) also made it back and top-landed to drive down the other vehicle. Meanwhile in the LZ it was super-busy with a lot of hang gliders landing and the occasional PG pilot. Nobody else went XC from Marshall today, while we managed to fly 20-30 km. Tracklog is here.