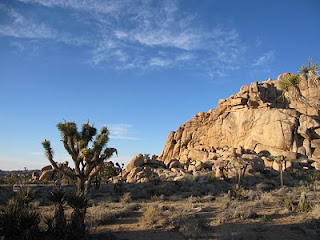 After flying in LA our next stop was Joshua Tree National Park. We had never been there and heard it was great for climbing and general hiking around. Found the climber's campground which puts you right in the middle of the climbing...you can climb a few meters from your tent! Spent a few days doing some hikes, bouldering, and trying some sport routes. Very hot in the middle of the days (30+C) and then colder at nights (a couple weeks ago it was snowing in J Tree!). As the weekend approached it just got busier and busier, and we learned that it was Spring Break. Apparently in CA, they stagger their breaks amongst all the schools so the entire month of March ends up being Spring Break for somebody, which results in huge crowds at the popular sites. As we left the park there was a huge lineup to get in, and we were glad to be moving on.

With this in mind we went to a lesser-known climbing site called New Jack City near Barstow, which has more sport routes and less of the traditional routes of J Tree. Much quieter and oodles of sport routes surrounding us. Once again we were able to camp right at the base of the routes and get a quick start in the morning, before it got too hot to climb in the sun. 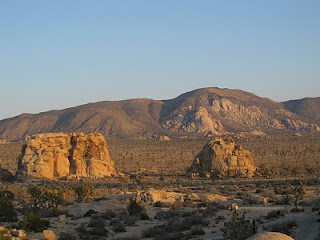 The weekend at NJC was super-busy...40-50 climbers all in the same area and lots of campfires at night. But once Monday rolled around it was dead quiet and we had the whole place to ourselves. It looks like this is a weekend destination for the LA climbers and not a whole lot of climbing on the weekdays. That suits us just fine as we then have the pick of the routes, and can camp out at a wall and practise all sorts of techniques without feeling like we're hogging the choice routes.

The desert so far is very beautiful, very green and all the plants are about 4-5 days from blooming. The desert will only stay this green for a short while, before the hot sun turns everything brown and all the flowers wilt. I'm hoping we get to see the desert bloom...we just have to make sure we don't head north too quickly and staying ahead of the blooming season. I've heard it's quite something to see 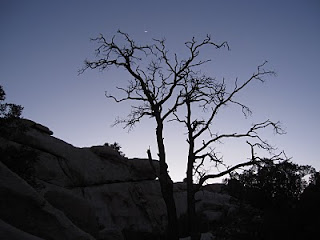 We are just outside Las Vegas, and it's super-windy. We'll see what happens when we roll into town but we're likely to hit the climbing at Red Rocks, and perhaps paraglide if the winds subside.