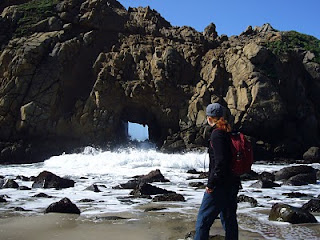 Alex and I are on a road trip to the USA, getting away from the cold and wet of Vancouver. We are hoping to do some paragliding and also some rock climbing at some of the classic spots of the desert Southwest.

Stopped at Marina on Wednesday and it was strong...a big storm had blown through the day before so it was still dying off. Too strong really for PG, although Alex took his glider out and got about 10 minutes at the HG ramp at Marina State Beach. Apparently the recent storms have really done a number at Lakecourt (we didn't bother heading up). At the HG ramp the previously sloped dune below the ramp is now a steep cliff, so no more kiting up that slope for the time being. 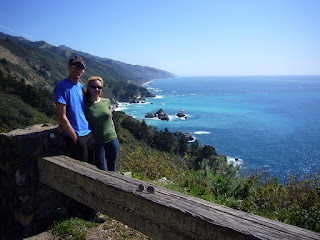 The next morning we did a hike in Big Sur and then started the drive down the coast. As we got to the actual Big Sur flying area we noticed we were passing the HG landing zone, and stopped to ask a local about where the LZ was. Turns out the one guy we talked to was the only local pilot (!), and gave us excellent directions to the launch.

One hour later we were on launch (which is 1 hour up by car, 2 wheel drive, and at 3300') and it was launchable, but almost certainly a sled ride. Given that the turnaround is so long, and no way back up besides hiking, we decided it wasn't practical for both of us to fly. So out came the coin and we flipped to see who would get to fly, and who would be driving down.

Alex won (!), and off he launched over the mountains of Big Sur. It was a sled ride and he was waiting at Harry's house when I got back down to the bottom. 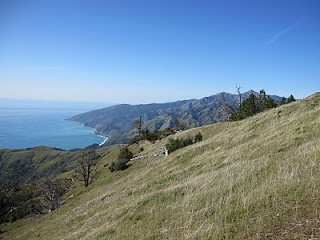 But very scenic with the cliffs dropping right into the water from the highway.

Next day we arrived in Santa Barbara in time to hook up with the Eagle Paragliding and Circling Hawk folks, and up to Alternator launch we went. This launch is at about 3800' and is once again 2 wheel drive, on a paved road to some antennas. It was NW up high, and the launch takes a south wind, so it was really over the back up high but flyable down low.

After watching some locals launch and stay up I launched as well and was soon above launch in ratty and punchy thermals. They weren't well-formed, and finding and staying in them was difficult. I flew upwind to the edge of the allowed airspace (Santa Barbara airport is nearby, and you have to phone ahead of time to tell them you'll be flying) and everytime I got above 4000' it was very windy from the NW. So after a while I flew out to the LZ and found plenty 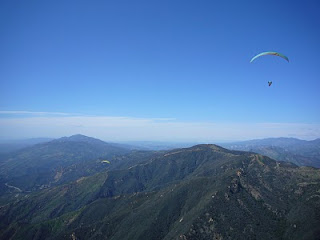 of lift on the way out, and over the LZ. I could have thermalled out from the LZ 5 or 6 times, but everyone else was landing and I was getting hungry. Flight time 1:15 and it wasn't even cold at 4000'!

We are meeting up with a local LA pilot tomorrow to head to Marshall, so we'll get some more flying in SoCal before we head inland to Joshua Tree.