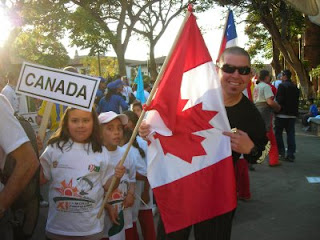 Since the mandatory pilot safety meeting was for today at 3pm, not many people chose to fly and possibly be stuck on the Mesa at that time. But some people went for a quick Torre flight…Jim went up to do a last check of his new wingtip lines. The rest of us lounged around in town or at the HQ.

After the safety briefing was the team leader briefing. I chose to stay for that out of curiosity. And I was not disappointed. One of the issues that came up was whether the goal would be a cylinder, or a line. Originally it was to be a line over the goal point, 200m on each side, perpendicular to the last TP (virtual, with a physical line for the media), but many pilots opposed the line idea, so after a vote it was decided that goal would be a 400m cylinder (which in my mind was a lot easier for pilots to digest).

But then after the vote it was brought up that with a goal cylinder, there was the possibility of cheating by pilots landing just short of the goal cylinder, and running into it (since from 400m away an official couldn’t really tell if you landed inside or not). So after a big more discussion another vote was taken, with more pilots liking the line idea rather than a cylinder. So after the vote was finished and supposedly done with, nope. I’m sure with more discussion and arguments, the vote would have swung back and forth indefinitely.

I’m sure there will be yet more nit-picking hoopla at tomorrow’s team leader briefing. They were saying those meetings could be finished in as little as 15 minutes…I remember at both the Brazilian and Australian Worlds, those meetings took waaayy longer than that, especially if there was some fine point that needed excruciating debate. I swear some of these countries are too caught up in that to remember that flying is supposed to be fun and not about politics.

Anyways, enough about that. We had the usual parade of nations through the streets of Valle, starting at the Zocolo and ending at the HQ down by Alas del Hombre on the water. Canada was sandwiched between Bulgaria and Chile near the front of the parade. We were treated like rock stars with confetti and cheering fans, brass marching band, and Federales all over the place.

Down at the water was the stage where the local government officials, FAI delegates, and sporting bodies did their speeches. Most of it was in Spanish so not really sure what they were talking about, but we were sufficiently entertained by the Czechs who were sitting behind us, who had managed to smuggle in a case of beer and were making their way through it. And of course the Red Bull Girls were out in full force, as were the Nextel Girls. Hopefully they won’t be doing drug or alcohol testing tomorrow as I’m sure many pilots were indulging tonight, the last night before the next 12-13 days of hard flying.