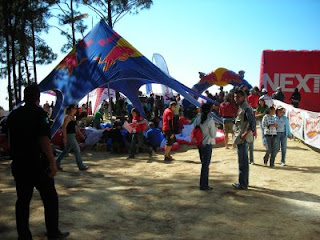 Day 1 of the Worlds and everyone was excited for a classic Valle task. The task committee decided on a 75 km task: an exit start around the Piano LZ at 1pm, then Divisidero, La Pila (out on the flats), Quintanilla (out towards Saucos), Iglesia, and goal being a cylinder around Torre launch, so you could land at the Lake LZ safely.

The launch queue was a cluster as people had set up their equipment right in the launch lineup spot, and people were jostling for position irregardless of their WPRS ranking. I was almost knocked over a few times by guys with their huge-ass harnesses turning around in the launch crowd. Once you got to the front of the queue then the WPRS ranking mattered, as the launch director (Juan Carlos) would only allow pilots to enter the launch in order. I’m sure as 1pm rolled around there were still people still trying to get off launch.

I had a shitty start after launching…the lift right in front of launch was too crowded for me to want to turn in, so I flew out front to find something out there. Nada, and I almost dirted it at the Piano as 1pm rolled around and the race started. But I was concentrating so much on not landing that I didn’t really notice the time.

I finally found something that got me out of there and over to El Penon, where it was in a sink cycle and a bunch of us had to wait for the next pulse to let go. When that happened it was onwards and upwind to Crazy thermal, where I knew there’d be lift to get me high enough for the crossing to Maguey.

As I did the crossing I could see most of the field ahead of me already on their way to Divisidero, under nice clouds. So I figured if I could get up on Maguey I’d be OK, and could just surf the edge of the Mesa a-la Bridal.

Going to Divisidero was slow, as it was upwind and the north wind was significant. But the Bridal ploy worked and as long as you stayed on the edge of the rim you would find lift. Finally tagged Divis and then it was crosswind to the flats and La Pila.

I’ve never flown the flats on that side of the Mesa before so I was cautious, staying under clouds and taking every climb as high as I could before going onwards. The strategy worked and I tagged La Pila. Now came decision-time: take Espina and the shortcut to Quintanilla via El Penon, or take the long was via 3 Kings/Maguey/Serro Gordo?

Turns out most of the fast pilots had chosen the shortcut Espina route. However I was alone except for Kamira from Brazil, so I opted for the more well-known (to me anyways) route via Serro Gordo.

The usual clouds were in place all the way and surfing along the edge of the Mesa, heading towards Quintanilla at cloudbase 3300m, I could see the lead gaggle coming at me from there. There was a group of about 8-10 pilots out front and they were just moving! We converged for a few minutes as they stopped to top-up where I was flying along, and then they were fast in the distance as I flew the opposite direction.

The convergence had set up so it was nice and easy to Quintanilla, and getting back to the edge of the Mesa was easy too (although slow). Got myself established under the clouds and then did the run to Iglesia.

I could see the clouds were starting to thin out a bit and knew the day was coming to a close. So I made a quick calculation and decided I had enough to tag Iglesia, glide over the Lake, and also tag Torre for goal.

So off I went, tagged Iglesia, and then the glide over the Lake. I knew it was going to be close, since the Torre TP is actually slightly behind launch, so you can’t just come in below launch and expect to tag it. I arrived at launch with about 100m to spare, enough to drift back and tag the goal TP, and then the victory glide into the actual goal field at the Lake!

When I arrived it looked like just about everyone else was already there, maybe 100 pilots in goal? Eric Reed was 1st with 2 hours and 1 minute; congrats to him! Keith was somewhere in the lead gaggle and is probably top 10. Jim Orava also made goal. Brett pushed a bit too much bar on the way back from La Pila, and dirted it partway along the courseline.

It was really fun to fly with just Kamira, and avoid all the large gaggle hoopla that everyone else had to deal with. But getting low like that over the Piano in the beginning was not fun, and I think I’d rather have a more comfortable start, ie. At cloudbase! Most of the flight was alone, except for Kamira for the last half, so it was rather like flying a regular XC in Canada (no other pilots). I’m sure my ranking won’t be that impressive, since about 100 pilots made goal ahead of me, but hey making goal slowly is better than not making goal at all! Total flight time 3 hours 5 minutes, and I’m completely pooped. And it’s only day 1! Now we’re heading to Taco Alley for a victory round of tacos!