A very strong-looking day (and the first day of the first good stretch of paragliding weather this spring), with lots of industrial cu's around and wind too. Tentative plan was to go over the back and try to cross to Bridal. Cloudbase wasn't that high (1200-1300m), but high enough to make the glide to Agassiz Mountain no problem.

It wasn't that great at Agassiz Mountain either, but there were lots of clouds in the middle of the valley, so Alex, Jim, and I headed to Green Hill while Al, Nicolai, and Miguel continued onwards to Bear Mountain to try the crossing from either there or Hicks. It was quite windy on Green Hill, but lots of lift once you were south on the ridge a bit, so we were able to get high enough to continue south over the Fraser River. We had a close encounter with a Cessna as we were climbing out over Green Hill, and I had to throw a few spirals in to make sure he saw me and swerved away. Jim had a bit more trouble getting height and ended up landing at the cloverleaf on the Bridal side, while Alex and I headed more downwind towards Ludwig. Fortunately we were both able to find lift on the way (gotta love those sandbar thermals!) and get on Ludwig at 900m; yay!

You'd think that after getting to Ludwig the next part of the flight would be easy, given that we've done the Bridal run many times, but it was really windy and shady too. We were able to cloud-suck our way back to the Lakes and stay at 1400m, but getting around the corner of Cheam was the crux, and we almost didn't make it with all the wind, almost having to land with Jim at the cloverleaf exit. But once around the corner it was OK as we were able to ridge-soar our way up the ridges on Cheam and get back out of the strongest part of the valley wind.

We were able to cloud-suck our way back to launch and then continued west to Gloria (very slowly!), and then to Elk, where cloudbase was still only 1300-1400m. Not quite enough to get back to Woodside, especially given the wind, so we opted to glide into the valley and see what would happen, and perhaps land at the Rosedale school.

I saw a nice cloud in the middle of the valley and headed for it, while Alex was downwind of it and heading for the school. But despite me being in the optimal spot to find the thermal that was feeding it, Alex found the climb and I didn't, which enabled him to make it a few km's further than me in the end. But we both landed short, on the Rosedale side of the Fraser River, and unable to complete the circuit we'd been hoping to accomplish. Denied! 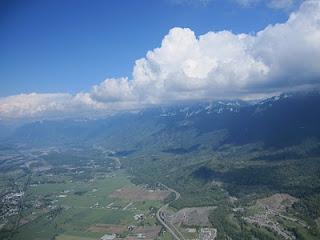 Al Thielmann was there to pick both of us up (he and Nicolai had landed in Laidlaw) and then it was back to Woodside. Meanwhile Miguel had landed in Ruby Creek. They all reported lots of wind, as were all the people flying at Bridal. Meanwhile it was actually getting bigger around, with anvils at Chehalis, behind Cheam, and behind Gloria. And it looked like it was spitting rain on Woodside at one point. So we weren't entirely disappointed to be landing at that point.

So despite the forecast for not much valley wind, there was actually plenty of it. Had the winds been lighter, or cloudbase a bit higher, we probably would have had a better chance of flying back to Woodside since it was one of those rare days with obvious cu's in the middle of the valley all day. Total distance was about 47km, and tracklog is here.
Posted by Nicole McLearn at 11:00 PM