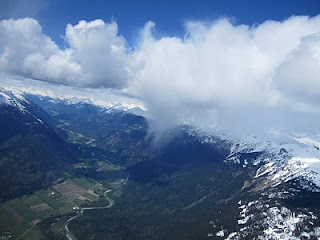 Woke to cloudy skies which was actually nice, as it meant it would take a bit longer to heat up and possibly keep the skies more human today. A quick dip in the hotsprings and then back up the lake to Pemberton for some flying.

Since it was a Saturday there were lots of people around, and some HG's from Vancouver too. Up to launch and it was currently blowing down due to a large cloud overhead shutting things down. But the skies in general were nicer and no anvils. But still a bit too unstable for a large run downrange since I didn't want to get stuck on the wrong side of a cell forming.

Cloudbase was higher today, even though I stayed away from the bases like yesterday (I climbed to 2800m and then stopped...it was cold!). Flew down to the gap and then saw a cell dropping snow down near Hurley, so it wasn't really possible to head all the way down there. But I decided to cross the gap and then watched on the other side for about 20 minutes as the snowstorm slowly formed and moved. But it was moving soooo slowly (there was practically no wind) I didn't want to wait for it to pass to continue to Hurley, and I didn't want to fly through it, so I turned around and headed back to launch.

Meanwhile Alex had crossed the valley and headed back to launch via the Miller side. He flew to Currie via Rutherford and then landed at the same LZ as I did yesterday.

Back at launch there were still people flying so I crossed the valley to Signal Hill, where I had a heck of a time getting back up and high enough for the crossing to Currie. Alex had already warned me of the south winds coming over the top of Currie so when I got there and got up I was ready for the shit-kicking I got at the end of the climb and hit the south wind (Currie faces mostly north). With my Currie TP in the bag I headed home to close my OR. Total distance almost 50 km and 3+ hours, and tracklog is here.

Plenty of lift in the middle of the valley and the skies were looking really nice as it had dried up and the cu's were now normal-sized. The HG's were still in the air and having a great time, and a load of pilots were heading up for a nice late afternoon flight. But Alex and I were pooped and had to head back to Vancouver anyways, so we left while it was still obviously good in the air.