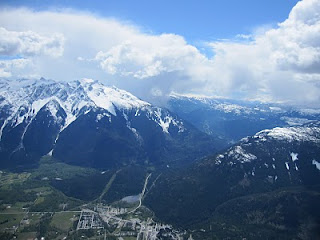 We decided to head up to Pemberton for a change of scenery, even though we were aware it might still be too unstable for the area. When we arrived around noon there were already large towering cu's all around, and a few anvils were threatening to erupt.

In the air it was very industrial and large cells were all around. Some cells were starting to drop virga and get anvil-shaped, so it wasn't possible to really go XC. You didn't want to head downrange and find your only escape route blocked off by a cu-nim! So I decided to stay local and keep a sharp eye on the skies. I got to 2300m+ but never reached cloudbase, which was just fine as I didn't fancy getting cloudsucked.

After a while the skies started to get more threatening. With a large anvil starting behind launch, one downrange towards Hurley, some at Whistler, and one starting up across the valley over the Ipsoot glacier, the best option was SE towards the airport. But as I got closer I noticed a small plane doing circuits around and around the airport. Not the best place to land at that moment, I decided, and opted to land at the Pemberton Music Festival grounds instead. 2320m and 1 hour flight time before it got too big for me. Tracklog.

The skies never got too epic and we never had any thunderstorms but it was definitely on the edge. But with a large chunk of day left we didn't want to fly again, so we decided to head for Skookumchuck hotsprings for a soak and then camp overnight.